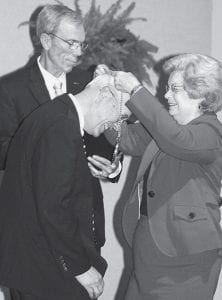 Phil McCartney, left, president of the Northwest State Community College Board of Trustees, and Sue Derck, vice president, hang the presidential medallion around the neck of Tom Stuckey, the sixth president of the college. An official inauguration ceremony for Stuckey was held Thursday, Oct. 16 at the college.- photo by David Pugh

The inauguration ceremony of Tom Stuckey, Northwest State Community College president, could have been all about Stuckey.

Instead, the Thursday, Oct. 16 ceremony was all about NSCC.

That’s what Eric Fingerhut, chancellor of the Ohio Board of Regents, said as the event’s keynote speaker.

When it was Stuckey’s turn to speak, the sixth Northwest State president spoke of change: the need for change, and the changes that must be made.

Stuckey said one of the biggest barriers to future greatness is the nation’s past success.

“America’s problem, whether in the world of business, health care, or education, is that we are entering the 21st century with ideas, companies, and institutions designed during the 19th century.

“Times have changed, and Northwest State must embrace the change,” he said.

The college, he said, must mentor new entrepreneurs, help northwest Ohio industries and students embrace the global economy, accept new opportunities, and build an educated work force with skills that are needed in the 21st century.

Ted Strickland, Ohio governor, has set three goals: Ohio colleges and university must graduate more students, more of the graduates must remain in Ohio, and Ohio must attract more degree holders from out of state.

Stuckey had four responses to the challenge: more parental and teacher encouragement, more relevant science and math programs in high schools and colleges, greater use of computer and high-tech skills, and careers built on pathways, connecting high schools, community colleges, and universities for all ages.

“My vision is that Northwest State will set the example on how community colleges can work with the K-12 systems and career centers to build entrepreneurial opportunities, as well as continuing to collaborate with the four-year colleges and universities.

“Together, we can graduate students who are ready and able to fill their roles in business, industry, and their professions.”

Mark Miller, president of CK Technologies, Montpelier, told the audience that his company, makers of plastic body parts for the heavy truck industry, had been a collaborator with Northwest State.

He said 15% of the company’s workforce had attended NSCC, and 30 employees are currently enrolled at the college.

Additionally, Miller said a $100,000 government grant had come through CK to Northwest State.

He said the company had experienced 600% revenue growth, with 400% employment growth.

“Those were very good years,” he said

Last year, even in challenging times, the company had seen 30% revenue growth, and 20% earnings growth.

He said by partnering with Northwest State, “We are able to pursue opportunities together.” David Pugh