Stryker Officer Pulls Gun On Truck Driver, Who Turns Out To Be Black 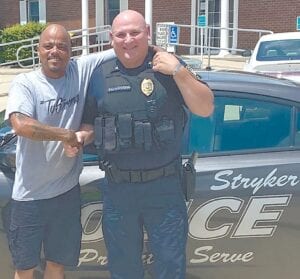 Kenya Sayles, a truck driver who travels through Stryker, with Steve Schlosser, Stryker police chief. On Saturday, June 20, a Stryker officer stopped Sayles for allegedly failing to come to a complete stop at a stop sign, then drew his gun and pointed it at Sayles. Schlosser said the officer was “not in the right mindset” when he pulled his weapon.– courtesy photo

Steve Schlosser, Stryker police chief, said the narrative from a Saturday, June 20 incident in which a Stryker officer drew his weapon on a black truck driver was about officer mental wellness, not about race.

Schlosser said Kenya Sayles, Bellefontaine, a driver for Venture Express, was driving a semi south on South Defiance Street in Stryker. He was on his way from a plastics factory in West Unity to the Marysville Honda plant.

Hough activated his emergency lights and attempted to stop the truck.

Schlosser said Sayles told him he was driving down the road, listening to his radio, and didn’t realize he was being pursued until he saw oncoming traffic pull over to the side of the road.

He had traveled about a mile south of the intersection when he saw the police car, and brought the semi to a halt.

Once Sayles stopped, he began to gather his paperwork. Then he looked out the window and saw Hough, gun drawn, approaching the truck.

Schlosser said Hough, who is also a probation officer in Paulding County, had been a Stryker officer since February 2018.

But he was struggling with his decision to be a police officer.

Schlosser said Hough had talked with his family and prayed about continuing in the job. Hough had written a letter of resignation, which he was holding, waiting for the right time to turn it in.

He called Hough a victim of a media anti-police campaign, of YouTube (an Internet video sharing service), and of Facebook.

Hough was afraid, Schlosser said, afraid for himself and his family, but he couldn’t name what specifically he was afraid of.

When Sayles didn’t stop right away, Schlosser said Hough thought Sayles was trying to flee, and the “pursuit” felt like five miles, not one.

Hough was “not in the right mindset” when he got out of his patrol car and drew his weapon, Schlosser said.

In the video, which Sayles posted to Facebook, Hough ordered Sayles to “show me your hands,” which Sayles does, holding his hands out the window.

Schlosser said Hough didn’t know Sayles was black until he saw his hands.

When Hough commands Sayles to get out of the truck, Sayles refuses to do so until Hough puts his weapon away, saying he feared being shot.

Schlosser said at that point, Hough had violated Stryker police policy by drawing his gun on a minor misdemeanor traffic stop.

Sayles, on the other hand, had committed the offense of failure to comply with the order of a police officer.

But, Schlosser said Sayles “is a black man in the United States who watches the news, and he sees police officers mistreating people of his race.

“I would have done the exact same thing. I would not have gotten out of my vehicle.”

Schlosser said he sees the work of God in the situation.

Hough had been calling out to God for a sign as to whether to continue as a police officer.

“God put Sayles, with his calm demeanor, there to effectively talk Hough down,” Schlosser said.

Hough did holster his weapon, which officers “are not trained to do.”

He said with the Hough’s gun in his holster, Sayles got out of the truck.

Hough gave him a warning about the stop sign. Before the two parted ways, they gave each other a hug.

About an hour after that, Schlosser learned information about the incident was making the rounds on Facebook.

He decided to get into his office and investigate the matter.

Through the trucking company, Schlosser was able to contact Sayles, and the two had a 45-minute conversation.

“The first thing I told Kenya, was on behalf of myself and the Stryker Police Department, I apologize,” Schlosser said.

Schlosser said he explained to Sayles about Hough’s struggles. Schlosser said Sayles told him when he saw Hough put his gun away, he “knew this kid is crying out.”

Sayles and Schlosser met in Stryker on Monday.

Another meeting is planned for Saturday in Stryker, and includes Hough.

As of yesterday, Tuesday, Schlosser had not received Hough’s letter of resignation, but considered him dismissed from the force.

Schlosser thinks he is obligated to take some disciplinary action, such as putting a memo in Hough’s personnel file. That file is a public record, and would follow him if he applied for another police job.

But, Schlosser said, “on the other hand, Keith is not going to go,” to another police department.

Schlosser said he was “fully prepared to terminate Keith… but after learning later it was Keith’s intent for that to be his last day… and after talking with him on a very personal level, we came to the determination that his mind wasn’t there, and he needed to get out.

“On one hand, it’s a very sad situation. On the other hand, I am very proud of Keith for being able to recognize he needed to get out of law enforcement.”