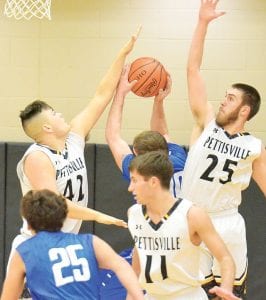 Pettisville’s Graeme Jacoby (42) gets a hand in the way of the shot of Stryker’s Kristian Grapengeter as Dillon King (25) helps from behind. Also on the play, Justin Rupp (11) keeps an eye out to prevent Luke Holsopple (25) from getting in on the play.– photo by Mario Gomez

The Pettisville boys basketball team suffered its first setback in the Buckeye Border Conference this season, falling to Stryker 54-44 and dropping to 9-1 in the league.

With the win, Stryker raised its BBC record to 8-1.

“The first quarter was definitely the story of the game,” said Brian Leppelmeier, PHS head coach. “Digging ourselves a hole like that– that can’t happen.

“They got too many good looks on the perimeter and we struggled offensively. We weren’t finishing at the other end of the floor, and that’s a bad combination.”

The Blackbirds bounced back and defeated Ayersville 63-56 to move to 16-2.

Playing in front of a packed house in the Bird Cage, Stryker (12-5) came in looking to hand the Blackbirds their first BBC loss, Friday, Feb. 2.

Pettisville led 4-2 after buckets by Canidate Vickery and Detric Yoder.

Stryker scored 11 straight points in a three-minute span to lead 13-4 and caused Leppelmeier to call a timeout.

Graeme Jacoby scored on a layup, but the Panthers scored the next seven points for a 20-6 advantage.

Jacoby scored a conventional three-point play at the end of the first to pull PHS within 11, 20-9.

The Birds scored the first points of the second on a Dillon King layup, but went cold for the next three minutes.

With 2:31 left in the half, PHS scored the final nine points of the half on buckets by Vickery and Landon Roth and five points by Jacoby to head into halftime trailing by five, 25-20.

“I think our kids bounced back in the second quarter,” said Leppelmeier. “We just could really never get them out of rhythm offensively.”

King hit a free throw to pull the Birds within four, 25-21, but Luke Holsopple answered with a three-pointer and Chase Glock scored two straight buckets to open a 32-21 lead.

Stryker recorded its biggest lead of the game, 41-25, with 2:52 left in the third, before Pettisville scored the final six points to cut the difference to 10, 41-31.

The Birds scored the first five points of the fourth to pull within five, 41-36.

It was the closest Pettisville got the rest of the game, as the Birds went cold at the free-throw line, missing seven straight.

Stryker outscored Pettisville 10-5 in the final 2:06 to secure the win.

“In a game like this you’re gonna find out what you’re made of, moving on,” said Leppelmeier. “I think we look at every game, whether it’s a win or a loss, and try to learn from it.

“We try to put emphasis on every game like it’s the biggest game on our schedule. Our effort has to be constant.”

Glock and Ferguson led the Panthers with 13 each. Holsopple chipped in 12 points on four threes.

Rebounding was nearly even, with Pettisville pulling down 28 to Stryker’s 26.

The Birds took to the road to Ayersville, Saturday, Feb. 3, in a non-conference match up.

Pettisville used a big third period to recover and change the tide of the game, outscoring the Pilots 23-10 for a 50- 46 lead going into the final eight minutes.