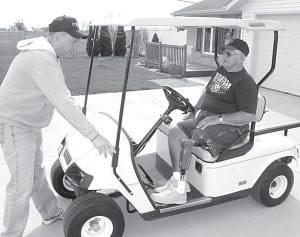 Tracey Zuver, left, talks to his father Don about the golf cart Tracey is preparing for street use. Don lost his left leg in a 1967 accident. The open design of the golf cart makes it easier for him to get in and out of the vehicle.– photo by David Pugh

Don Zuver, Archbold, will soon be able to get around easier, thanks to a new law approved by Archbold village council, Monday, Nov. 8, 2010.

The new law allows golf carts to travel on some streets in the village.

Don lost his left leg as the result of a November 1967 vehicle-train accident at the Franklin Street crossing. He wears a prosthetic leg and uses a walker, but even so, it’s difficult for him to get in and out of a car or his minivan.

“Because the golf cart is so open, he can slide right in,” said his son, Tracey Zuver, Archbold.

“They’re in Florida six months of the year, and this is what he drives all the time. The park they’re in, they have golf carts, and he’s gone. He’s going everywhere. He comes home in the summer, and he stays" in the house.

“He has an electric scooter, but he’s not comfortable with it. It’s tippy, it’s slow, and he can’t take passengers.”

When Archbold passed the law allowing golf carts, “He (Don) was all excited. He wanted one right away,” Tracey said.

But under Archbold law, the golf cart must have much of the same equipment as a car to be street legal.

“I went to the Archbold Police Department, and got a list of their mandates,” Tracey said.

“I started checking around, and I found a golf cart place out of Florida that sells everything for street-legal kits. I told them what cart I had, and they sent me everything as a package.”

Right now, they’re waiting on their Department of Transportation- approved windshield and the back seat, which were delayed in shipment.

In all, it took about eight hours to add the parts.

“It was an easy, fun project,” Tracey said.

Once all the parts are on the golf cart, Tracey said they have to obtain proof of insurance, and then have the cart inspected by the police department.

“They’ll inspect the brake, the parking brake, see that it (the cart) can’t exceed 20 mph, and sign off on it, and we’ll get a license plate for it. It will be a licensed vehicle,” he said. Access

The golf cart is only a partial solution for Don.

A golf cart can cross those streets, but can’t travel along the street.

That means that a golf cart can’t get from the north side of Archbold to the south side, because the only places to cross the Norfolk Southern tracks are North Defiance Street and Franklin Street.

A golf cart can’t use North Defiance Street because it’s a state highway (St. Rt. 66). It can’t cross at Pleasant Street, because it would have to travel a few hundred feet from Ditto Street along Stryker Street.

Golf carts can’t get from North Pointe Estates into downtown, because West Lutz Road has a speed limit of more than 25 mph.

Tracey said Don wants to be able to drive the golf cart from his home on the north side of the village to Memorial Park to watch his grandchildren play ball.

Today, he takes his minivan, but because it’s difficult for him to walk, he watches the game from the van through binoculars.

“I want to try to talk to the village council about allowing at least a little bit of Stryker Street (to be used by golf carts).

"At least he can get over to the ball diamond, and he can watch his grandchildren play ball.

“My thing is, a moped, that can only go 20 mph and you have 14-year-old kids riding them is allowed anywhere. This does 20 mph, and it’s a larger vehicle driven by an experienced driver.”

Tracey said for his Dad, “this is freedom.”