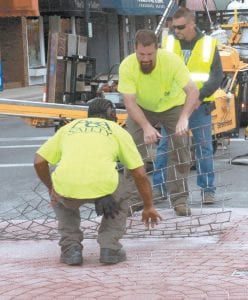 Workers from A&A Safety, Amelia, imprint another portion of pavement at the intersection of North Defiance Street and Holland Street Tuesday.– photos by Mary Huber

Archbold Village Council opted to add white to the colors that are currently being imprinted into two intersections on North Defiance Street at its Monday, June 6 meeting.

Bob Seaman, village engineer, showed council members two colors that were selected for the intersections, then showed additional colors that could be added.

One color was a reflective white that will outline the crosswalks.

Seaman noted that when lines delineating a crosswalk are used, they must be white.

However, white is not required when no lines are present.

That portion of the state’s uniform traffic code is open to interpretation.

Seaman said the work at the North Defiance Street intersections of Holland Street and Stryker Street is a “oneshot” process.

A layer of colored thermoplastic material is laid over the surface of the asphalt paving.

Then the thermoplastic melts and bonds with the asphalt. 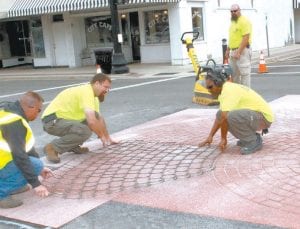 After the thermoplastic cools a little bit, a grid, making up the brick pattern, is pressed into it.

The thermoplastic material should last as long as the pavement, but Seaman said the white color will fade in time.

He said the work at the Holland Street intersection will be done during daylight hours, but Stryker Street work will be done at night.

Council approved the bid of A&A Safety, Amelia, to install the pavement coloring and markings at its Monday, May 2 meeting.

Kenny Cowell, council- man, said he had been approached by a group of youths asking for the village to construct a facility for skateboards and BMX bicycles.

Such facilities– usually made of concrete– feature ramps, rails, bowls, and other structures riders can use to do tricks. 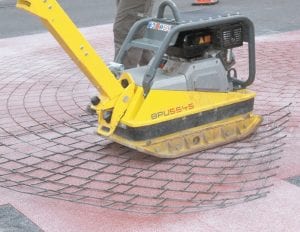 Both Wauseon and Defiance have such parks, Cowell said.

Vaughn Bentz, councilman and a member of the Park Board, said Park Board had looked at adding skate-bicycle parks before, but based on the number of potential users versus the cost of the project, didn’t see the value for the money.

Sites had been considered. Bentz said the site of the old tennis courts at Memorial Park was a possibility, since lights are still in place.

Kevin Morton, also a member of both council and Park Board, said another idea was to pave the ice rink in Ruihley Park. In the winter, it could still be flooded for ice skating.

Cowell said those proposing the skate-bike park pointed out Park Board was building a dog park. Morton said money for the dog park is being raised independently, without money from the board.

For example, one group proposed a “golf” course using flying discs. Another suggested a fitness trail.

Cowell asked that Park Board revisit the skate-bike park issue.

Morton said he would encourage those who want the skate-bike park to attend Park Board meetings and get involved in the project.

Council approved a conditional use permit for a home owned by Bob Buschur at 1924 South Defiance Street.

The home, built before the village zoning code was established, is located in an area zoned B-2, highway business.

Under that requirement, if the home is more than 51% destroyed by fire or tornado, it cannot be rebuilt as a residence.

The conditional use permit, recommended by the Archbold Planning Commission and approved by council, will extend to the next owner of the home.

If it is damaged beyond 51%, it can be rebuilt under the conditional use.

Prior to the meeting, a public hearing was held on the conditional use permit. No one spoke during the hearing.

She will become the village administrator when Dennis Howell, the current administrator, retires at the end of July.

It was announced at the council meeting that as of Monday, Howell has 24 working days left.