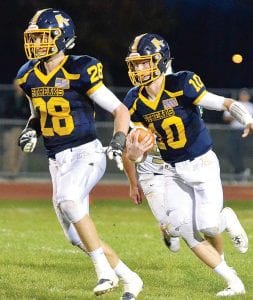 The Streaks claimed their first NWOAL title since 2010, and ninth in school history.

Archbold also clinched a spot in the Division V state playoffs that begin Friday, Nov. 3. The Streaks are ranked second in Region 18 and seventh in Div. V.

“These kids have put so much work into this program the past three years and bought into the program.

“Two years ago it wasn’t the prettiest at times, but to get to this point took a lot of hard work and dedication.

“I was very fortunate to get this job, and I’m very proud to be the head football coach at Archbold.”

Archbold knew the Vikings would be ready to play. It showed from the start, as the two played a scoreless first quarter.

With just over seven minutes to play in the first half, the Streaks took advantage of a bad snap on an Evergreen punt attempt. Gavin Grime tackled the punter in the end zone for a safety and a 2-0 lead.

After receiving the kickoff after the safety, AHS went to work, scoring on a 56-yard, 10-play drive that ended with a Sam Petersen 9-yard touchdown run for a 9-0 lead at the half.

“(Evergreen) plays hard and we knew that. They didn’t lay down,” said Dominique.

“They fought us every inch out there.

Streaks Roll In Second Half

Archbold received the second half kickoff at its own 38 and needed only six plays to score, with S. Petersen rambling the final 31 yards for a touchdown.

“That got our guys rolling,” said Dominique. “They got some more confidence and forgot about those mistakes they made earlier.

“Second half we came out with a different mentality, and we were able to do what we wanted.”

The Vikings finally moved the ball on their next possession and had a first-and-goal at the Archbold 2-yard line when running back Hunter VanWert was stripped of the ball. Zach Rocha recovered the ball and returned it 98 yards for a touchdown and a 23-0 lead.

It was a defensive game from then on until Gabe Petersen scored the final points with 6:44 left on an 8-yard run.

The Streaks had 341 yards of total offense to 224 for Evergreen, rushing for 274 yards while holding the Vikings to 31 yards rushing.

Evergreen quarterback Jack Etue was 12-20 passing for 193 yards and an interception.

While the seniors were recognized Friday night, they play their final regular-season home game when they host Swanton with plenty on the line.

The Bulldogs “have a shot to make the playoffs, so they’re gonna come and bring everything they have. So we’re gonna have to be ready to go Friday,” said Dominique.

A win will secure a firstround home game in the playoffs for the Streaks.