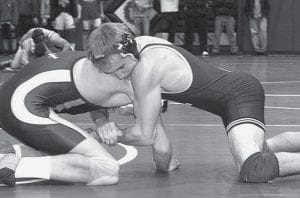 Chad Rufenacht, right, shown in action against Wauseon on Dec. 18, was named Most Valuable Wrestler in the upperweight classes at the Vermillion Duals last weekend.- photo by Scott Schultz

The team finish was capped off by the success of senior Chad Rufenacht (145 pounds), who was named as the tournament’s Most Valuable Wrestler in the upperweight classes (145-285 pounds).