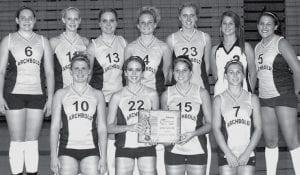 Archbold hosted Wauseon, Tuesday, Sept. 25 and won the Northwest Ohio Athletic League match 25-23, 17-25, 25-23, 25- 18. The exciting match was also the “Volley for the Cure” to promote breast cancer education, awareness, and fund-raising. Wearing pink were the players, referees, and some fans, and a pink ball was used.

Dani Newman hit back-toback kills to give AHS a 23-19 first-game lead. Emily Snyder blocked a Wauseon attack to put AHS at game point, 24-21. Adi Lange finished with a kill for the 25-23 win.

The third game started like the second, but the Streaks pulled themselves together. Dani Newman tied the game at 8 with a strong kill and smoked the ball to again tie the game at 20 with great response from the crowd.

AHS scored four points before Wauseon scored one in the fourth game. Wauseon took an 11-10 lead, but never again led the contest.

Lange scored a kill at 23-18 and scored the game-winning point by slamming the ball down for the 25-18 victory.

“We had some nice rallies and Wauseon did a nice job at adjusting to our offense,” said Julie Nofziger, AHS coach. “We found if we maintained the attack we had a better chance of winning those long rallies.”

Ranked 11th in Div. IV, “Kalida is a very athletic team,” said Nofziger, “and we struggled with our serve receive in our first game. Once the kids focused on getting our passing the way we like it, we were able to put together our attack game.”

“Hilltop struggled with our serving game and was unable to run their offense,” said Nofziger.

“This was a great battle as we exchanged serves with Gibsonburg. We had to pick up our blocking game, and they challenged our defense throughout the match,” said Nofziger.

Lange and Snyder picked up solo blocks, and, as a team, there were 18 shared blocks or blocks that were kept in play.

Lange and Dani Newman led the team in digs; passing 18 and 11, respectively.

In the game determining first or second place, the Blue and Gold battled hard for the win.

“Central played a very good match, and we seemed to have an answer for everything they did,” said Nofziger. “It was a well-played match, with both teams playing good defense.”

The Streaks missed one serve receive and picked up 56 digs.

“We were just able to maintain our attack game a little better,” said Nofziger. “We really played hard today and focused on one point at a time.”