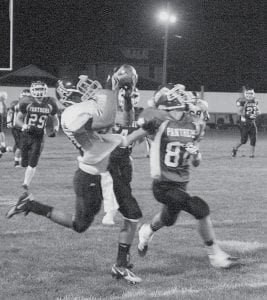 Jimmy Dunning snags a catch over his shoulder, above, in Archbold’s 49-44 NWOAL victory at Delta, Friday, Oct. 5. Dunning caught nine passes for 143 yards in the contest, including 12- and 15-yard TD catches. Colton Martinez, left, goes up for a catch as a Panther plays defense. Martinez had six receptions for 89 yards; his longest reception was for 39 yards. The win gives AHS a 5-0 record in the NWOAL.- photos by Scott Schultz

Shoot-out, track meet… call it what you will, but when Archbold rolled into Delta, Friday, Oct. 5, for a Northwest Ohio Athletic League football matchup, very few fans may have been expecting what they saw.

The Streaks had to come from behind to pick up win number six, edging out their host 49-44.

Archbold upped its record to 6-1, 5-0 NWOAL, setting up a battle of the titans this week when Patrick Henry comes to town, Friday, Oct. 12. The Patriots, ranked fourth by the Associated Press in Ohio’s Division V, beat Bryan 62-19 to stay undefeated at 7-0, 6-0 NWOAL.

“Both teams left it on the field,” said John Downey, AHS head coach. “It was a shoot-out, and we were able to win one fi- nally.

“Jamie Grime had his kids ready to play. They had a good game plan. They hurt us defensively; we didn’t have an answer ’til the second half, and we did a good job in the second half.

The Panthers set the tone early, taking the opening kickoff. On the first play from scrimmage, Adam Godsey raced around the right side of the Streaks and went 65 yards for the score.

The Archbold defense gave up 356 total yards on the ground; 304 in the first half. It was in the second half that the Blue Streak defense tightened up and shut down the Panther ground game.

Godsey set the tone for DHS with his TD run. Derek Lambert followed with a 23-yard touchdown run on Delta’s second possession.

Trailing 13-0, AHS finally crossed the goal line when Gene Goering hit Jimmy Dunning for a 12-yard touchdown pass to close the gap to 13-7.

Goering once again raised the standards in the Archbold passing game. Tossing five touchdowns, he broke his own passing record of 458 yards set Aug. 31 at Bryan. The senior signal caller was 31 of 50 for 475 yards.

The Panthers came right back as Aaron Betz capped off their drive with a 2-yard run to end the first quarter with a 21- 7 lead.

AHS countered early in the second as Dunning caught his second TD of the game, a 15- yard pass from Goering.

The shoot-out continued with Betz scoring on an 80- yard run, pushing Delta’s lead to 27-13 midway through the second quarter.

On Archbold’s next possession, Jacob Fidler crossed the goal line on a 4-yard run, closing the difference to 27-21.

The Panthers continued to put up the points, and took a 38-29 lead into the locker room at the half.

“Archbold’s offense is very good. Their defense came out in the second half and did what they had to do to stop us, and we came up a tad bit short.

Both defenses stiffened in the third period as the Blue and Gold shut out the Panthers, while Delta gave up just one TD as the Goering-to-Fidler connection closed the gap to 38-35.

It was the Streaks’ turn to take over in the fourth. Goering crossed from 1 yard out, and on their next possession Goering hit Fidler for a 72-yard strike and a 49-37 lead with 4:55 left.

On the ensuing kickoff, Jacob Beverly outraced Archbold’s kickoff team and went 82 yards for a score, tightening the score to 49-44.

The Panthers didn’t get another chance. The Blue and Gold chewed up the yards and the clock, picking up a 49-44 victory and setting a new Archbold record for highest combined score of 93 points.

“Obviously our defense played a whole lot better the second half,” said Downey. “Offensively we did a pretty good job all night. We had some stupid penalties that hurt us.

“Bottom line: we live to fight another day. Now we go into next week for all the marbles in the league and try get a leg up on everybody.”