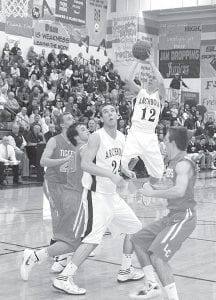 Jay Miller (12) takes a jump shot from the top of the key in Archbold’s NWOAL victory over Liberty Center. The Streaks are 7-0 in the league, and wrapped up at least a share of the NWOAL title with the win.– photo by Scott Schultz

The Archbold boys basketball team wrapped up at least a share of the Northwest Ohio Athletic League title with a 49-16 win over visiting Liberty Center (2- 16, 2-6 NWOAL), Thursday, Feb. 16.

The Blue and Gold travel to Evergreen, Friday, Feb. 24 looking to win an outright title.

The Streaks have won the outright title 15 times and shared it seven times.

With four seniors playing in their final home game– Luke Kammeyer, Hayden Stamm, Gabe Rodriguez and Tanner Wyse– the Streaks wasted no time putting points on the board.

Kammeyer won the tip for the Streaks, and Zeb Frank buried a three-pointer in front of the Tiger bench.

LC came right back with a bucket from Konnor Pohlman, but it was all downhill from there for the Tigers.

“All the seniors have been great,” said Doug Krauss, AHS head coach. “They are a good group of kids and have really come a long way this year.

“From day one we have shown a lot of improvement.

“Our league is really competitive, and we are not done yet. We have a piece of the title, but we want to get the whole thing.

Archbold scored the next 13 points for a 16-2 lead after the first eight minutes.

The Streaks continued to roll in the second period, scoring six straight points before LC’s Kaleb Pohlman broke the scoring drought at the 3:52 mark on a short jumper.

Kaleb Pohlman’s total of six points all came in the second period.

The Blue Streak full-court defense was relentless, forcing 19 turnovers while the Blue and Gold had just eight.

“Our full-court press gave our guys a lot of energy, and we were able to feed off that at the offensive end of the court,” said Krauss.

Archbold outscored the Tigers 12-8 in the third and held the visitors scoreless in the fourth while scoring 15 for the 49-16 final.

The Blue and Gold out-rebounded the Tigers 21-12.