Streaks Win Share Of NWOAL Title With Victory Over Wauseon 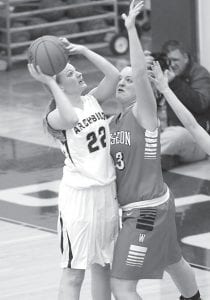 The Archbold girls basketball team guaranteed itself at least a share of its 12th Northwest Ohio Athletic League title with a 62- 48 victory over Wauseon, Thursday, Jan. 24, in the Thunderdome.

“It was a great win in front of a great crowd against a good team,” said Brian Ziegler, AHS head coach.

“We knew it wasn’t going to be easy. We knew Wauseon wouldn’t quit and would keep coming at us.

“They made some runs at us, but we did a nice job ending those runs by running our offense and getting a good shot.”

The Streaks led by as many as seven in the first quarter before the Indians closed to within four, 15-11.

Sariah Yackee scored a deuce, followed by one of two free throws, to bring Wauseon within one, 15-14, at the beginning of the second. 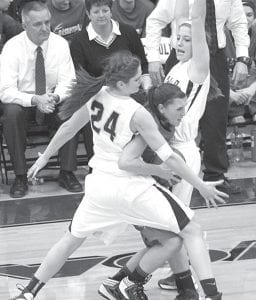 Jesse Fidler (24) and Cassidy Williams give Alyssa Reed no room to maneuver.– photo by Mary Huber

But AHS went on a 7-0 run on a Cassidy Williams basket, two free throws by Hannah Hesterman, and a free throw by Winter Fricke. Fricke missed her second free throw, and Hesterman grabbed the rebound and laid in the shot for a 22-14 advantage.

After the Indians got to within seven 50-43, on an Alyssa Reed three-pointer, Cassidy Wyse scored a deuce, then stole the ball and fed it to Williams for a layup to put AHS back on top by 11, 54-43.

Williams led all scorers with 19 points.

The Streaks led by as many as 17 points in the fourth quarter on their way to the 62-48 victory.

“Cassidy Williams gave us a huge lift coming off the bench,” said Ziegler. “She brings a lot of energy and playing consistency right now.

“Hannah Hesterman did a great job inside and at the free-throw line. Cassidy Wyse did a solid job all night.

“We had different girls step up at different times to clinch at least a tie in the league.”

Hesterman scored 17 points and Wyse, 14, to complete the trio in double figures.

Reed led Wauseon with 17 points. Maddie Richer was also in double figures, with 12.

“This was a nice win against a solid team,” said Ziegler. “Every possession is very important because of the way Holgate plays defense.

“I thought we did a good job handling their pressure and turning the ball over.

“Hannah Hesterman and Darian Oberlin did a nice job hitting some huge free throws. This was a battle and both teams played extremely hard. This was a great matchup to make us better.”