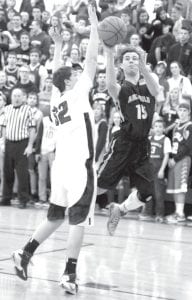 Archbold (15-8) started fast and never looked back as the Streaks dropped the Elmwood Royals (17-6) 65- 58 for a Division III sectional boys basketball title, Friday, Feb. 26, at Wauseon.

Archbold jumped out to an early 6-0 lead and finished the first quarter with a 15- 6 advantage behind the hot hand of Bryce Williams, who poured in 11 points in the first eight minutes.

The Royals were led by Tayte Lentz with 21. Trevor Solether scored 19 and Jarrett Childress finished with 11.

“We got off to a really good start with Bryce,” said Doug Krauss, AHS head coach.

“What I liked, was that Elmwood runs a lot of sets, and we guarded those sets; that was good to see and we were able to convert at the other end.”

Archbold had no letup in the second stanza, building a 30-16 lead with less than three minutes left in the period when the Royals got hot.

First was a deuce by Solether, followed by back to back threes from Lentz, which closed the gap to 30-24 at halftime.

The Royals outscored AHS 15-14 in the third and cut the difference to 36-34 on a pair of free throws by Solether, but Elmwood would not get any closer.

Archbold secured a five-point lead as the quarter came to a close on a three by Miller.

“Lentz got hot on us and got them into striking distance, but we were able to come back and make some plays,” said Krauss. “Everybody contributed tonight, and that’s all we ask.”

Kaiden Bedsole hit five straight foul shots to start the fourth. The sophomore finished the quarter by connecting on 7-7 from the free-throw line.

Welch added back-to-back baskets and Miller hit one foul shot, capping off a 10-0 run to start the final eight minutes.

Archbold used the charity stripe in the fourth, connecting on 15-20 and 28-36 for the game while the Royals were 8-14 for the game.

Elmwood finally got on the scoreboard at the 3:45 mark, with Lentz hitting a three, but the damage was done.

Archbold capped off the sectional crown with Miller adding two more at the charity stripe for the 65-58 final.

“The foul line was huge tonight. In tournament games sometimes it comes down to that,” said Krauss.

Archbold plays Van Buren (17-5) in the nightcap at approximately 8 p.m.