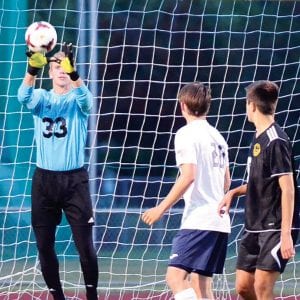 The Archbold boys soccer team upped its record to 3-0 after shutting out Pettisville 7-0 and pulling out a close 4- 3 win over Van Buren.

The Streaks and Blackbirds (1-2-1) renewed their in-county rivalry, Saturday, Aug. 26, when they met at Archbold High School for a non-conference matchup.

Archbold opened scoring with 26:12 to play in the first half when Kaiden Bedsole scored with an assist from Luke McQuade.

Josh Kidder’s goal with an assist from Trey Theobald with 3:26 in the first half, followed by a Theobald penalty kick goal with 2:42 left gave Archbold a 4-0 lead at halftime.

Archbold scored three more goals in the second half and played stingy defense for the 7-0 win.

“Pettisville set out early to stop us from scoring, but the biggest thing was to stay patient, and I think we did a pretty good job of that.

“Once the (first) goal came, I think we did a pretty good job of continuing to push forward.”

The Streaks had 19 shots on goal to two for PHS.

Archbold traveled to Van Buren, Tuesday, Aug. 22, to battle the Black Knights (1- 1) in a non-conference game.

Archbold led 2-0 after the first half on goals by Kidder and Gerig and two assists from Bedsole.

The Knights came back with three straight goals to take a 3-2 lead with 19:01 left in the second half.

A penalty kick goal by Bedsole tied the game at 3.

With 5:35 left, McQuade booted the game-winning goal with an assist from Kidder for the 4-3 win.