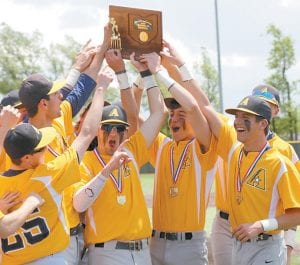 Lake never knew what hit it, Saturday, May 25, in the Division III district baseball championship game at Defiance High School.

Flying high at 27-0 coming into the contest, the Flyers came crashing down to earth as Archbold led 8-0 after one inning on three hits and four errors on its way to a 15-0 five-inning run-rule game.

The Streaks are ranked number one in Division III in the final Ohio High School Baseball Coaches Association poll, while the Flyers were ranked 11th.

“We played the toughest schedule this season that we have ever played, so we were totally prepared to meet this challenge”, said Dick Selgo, head coach.

“Our guys really took the underdog role to heart, and it showed right from the start.”

For the second consecutive game, the Streaks came out with bats blazing.

Junior Kade Kern had the big blast in the first inning as he drilled a home run over the fence at the 355-foot mark in left-center field. It was Kern’s third home run of the season. 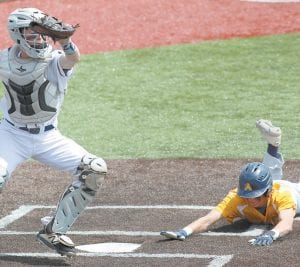 TJ Rice beats the throw to home to score Archbold’s sixth run of the first inning in the Div. III district final with Lake. The Streaks scored eight runs in the first inning on their way to a 15-0 shutout of the previously-undefeated Flyers and their fourth straight district championship.– photo by Mary Huber

TJ Rice, Kreighton Sims, and Jeron Williams also added hits in the inning. Rice drove in two runs, while Sims knocked in one.

Senior Cory Erbskorn powered one completely over the scoreboard for the first home run of his career in the second inning for a 9-0 lead.

As Archbold continued to score, 6-foot 5-inch lefty Rigo Ramos completely shut the Flyers down with a two-hit shutout for his 11th win of the year against only one loss.

Ramos threw two scoreless innings against Otsego in the 6-5 win in the district semifinal on Thursday, but kept his pitch count low enough that he was eligible to pitch again on Saturday.

TJ Rice picked a great time to have his best day of the season, as he went 4-4 and drove in three runs.

Kern ended up with three hits: a homer, triple, and single, plus three runs batted in.

Travis Ziegler slashed a triple, while Mitch Grosjean and Sims each added singles to give Archbold 12 hits in the five-inning game.

“Plays we made all year we just didn’t make today,” said Greg Wilker, Lake head coach, of his team that finished 27-1.

“They’re a great team. They put the ball in play, and we knew that was gonna happen. We just didn’t make some of the plays there.

“They have an outstanding pitcher on the mound and we talked about that, also. That’s why he’s a Division I pitcher.

Coming into the contest, Lake pitcher Jacob Boelkens “was 9-0 on the year. He usually throws three pitches for strikes. He just missed some locations and they hit some balls hard,” said Wilker.

“We had some missed plays out on the field, and it just snowballed.”

The Rams defeated Gibsonburg 4-1 in their district final.

Winners play for the regional championship and a trip to the state tournament in Akron, Friday, May 31, 5 pm, at Elida.

The Streaks have advanced to the regionals every year the 10 seniors on the team (Rice, Williams, Holden Galvan, Ramos, Grosjean, Erbskorn, Clay Nafziger, Aiden Warncke, Sims, and Ziegler) have been in high school.

In 2018, AHS lost to Gahanna Columbus Academy 4-3 in the regional semifinal.

The only time the Streaks advanced to the state tournament was in 2005, when they won the state championship.