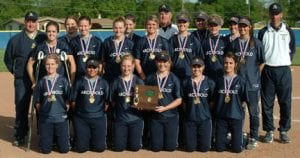 The Archbold softball team defeated Fairview 12-1 in five innings to win the Division III district championship at Lima, Thursday, May 22.

The Streaks scored three runs in the first inning for a 3-0 lead. Archbold scored one more in the top of the fourth for a 4-0 advantage. Fairview finally got on the scoreboard in the bottom of the inning to close the gap to 4-1.

AHS exploded for eight runs in the fifth inning and the writing was on the wall. Fairview went scoreless in the bottom of the inning and the Streaks advance to next week’s regional semifinal at Ashland, Thursday, May 29, 5 p.m.