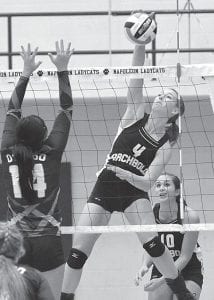 Becca Gerig (4) goes for the kill over Otsego’s Lindsey Donald (14). The junior had 22 kills in Archbold’s district championship victory over the Knights.– photo by Mario Gomez

It is the 25th district championship for Archbold since 1975.

“Since day one I told the girls what we want to be, and we want to be the best in the state. We had this goal in mind, and we’re not done yet.

“The last two years, not making it out of sectionals, it’s been tough. We wanted to make sure we had a focus since day one of practice and all the way through.

“The girls have really stepped up, and they’ve been working hard and going after what they want.”

After the first-set victory, Archbold held an 11-5 lead in the second before the Knights scored nine straight points to go ahead 14-11.

The Streaks came back with a run of their own, scoring seven straight points behind the serving of Cayla Walker for an 18-14 advantage. 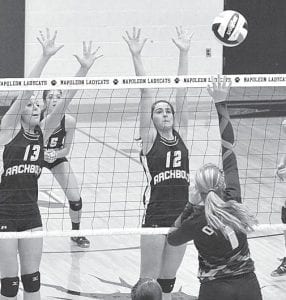 Otsego came back after the Blue and Gold built a 22-20 lead, and had tied the score at 23 when Rufenacht called a time-out.

Jenny Lehman’s spike was blocked out of bounds, putting the Streaks at game point, 24-23. Archbold won the game 25-23 when the spike of Otsego’s Abby Hesselschwardt sailed long on the next play.

“They changed their defense up on us and we found those holes where they needed to go.”

Between Otsego spiking errors and kills by Lehman and Desi Newman, AHS sprinted out to a 12-5 lead in the third game. The Knights fought back to within three, 20-17, but the gap was too much to overcome.

Sidney Rowe’s spike went into the net for the Knights, giving AHS the set and match, 25-19.

“They’re gonna be big and they’re gonna have a big front row,” said Rufenacht of the Cavaliers.

“They’re gonna get hands on balls. We’re just going to have to be ready for the big offensive line that they’re going to have.”