Streaks Vs. Tigers In Rematch 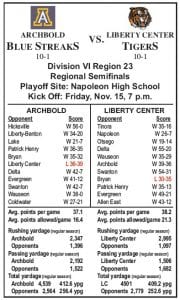 When Archbold (10-1) and Liberty Center (10-1) take the field, Friday, Nov. 15, 7 pm, in a Division VI football regional semifinal at Napoleon, the Streaks must be more disciplined than when they met during the regular season.

LC had 466 yards of total offense in the contest– 238 yards passing and 228 yards rushing.

“I told the guys to remember that score, because who knows what can happen. We might see them again,” said David Dominique, AHS head coach, after the game.

“In order to find success, we are going to have to play a more disciplined football game than the last time.

“When playing good teams like this, you must limit your mental mistakes (penalties and turnovers), and this will be a focus for us all week in preparation for them.”

The Tigers are making their 19th tournament appearance in school history.

LC advanced to the state semifinals last year, where the Tigers lost to Orrville 38-7.

•Zach Bowers, a senior running back and First Team All-NWOAL pick, leads the Tigers’ rushing game with 1,285 yards on 190 carries & 16 touchdowns. He averages 7 yards per carry.

•Max Phillips, a junior running back and Second Team All-NWOAL selection, has 977 yards rushing on 149 carries with 11 TDs and averages 6.5 yards per carry. He also has seven receptions for 111 yards and one TD.

•Karter Kern, a sophomore running back who received an honorable mention All-NWOAL, rushed for 532 yards on 81 carries with seven TDs this season. He averages 6.5 yards per carry.

•Cam Krugh, junior quarterback who was honorable mention All-NWOAL, was 86-131 passing for 1,498 yards, scored 16 touchdowns, and threw six interceptions. Against Allen East, he was 5-8 passing for 67 yards.

•Alex Righi, a senior running back and outside linebacker, had 22 receptions for 264 yards and 2 touchdowns. He was a First Team All-NWOAL pick.

•Connor Keller, a senior strong safety, had 29 receptions for 299 yards and two TDs on the offensive end. Defensively, he leads the Tigers with 42 solo tackles and 77 total tackles, with four interceptions. He was named First Team-Defense in the NWOAL.

“They have a couple very good running backs that run very hard and do not go down on first contact.

“As teams start to put more focus on stopping their run game, they will then catch you sleeping and throw over the top, which is what caused us a number of issues earlier this year.

“Defensively, they are a base 3-4 defense and will be very aggressive with blitzing in order to put pressure on the offense. We must communicate well upfront in order to have success.

“Although you never want to lose, the last game against LC helped us to determine some areas we needed to improve upon in order to make a run for the NWOAL title and make the playoffs.

“Right now, I feel that our team is playing confident in not only themselves, but also the guys around them.

“This team looks forward to coming to practice each day and takes preparation very seriously, which is a main reason why we have been able to find success.”

All four NWOAL teams in the playoffs won their home regional quarterfinal contests.