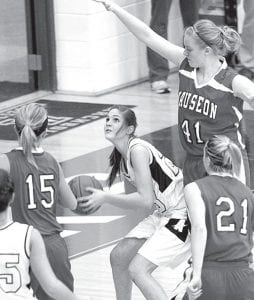 “It’s a great feeling getting a piece of the league championship,” said Brian Ziegler, AHS head coach. “I’m proud of our girls.

“We knew after the Evergreen loss back in December we couldn’t lose if we wanted a championship.

“We came out each week and took care of business. I’m extremely proud of our seniors– Alicia Drewes, Nicole Hurst, Sarah Wyse, and Alyssa Schaub. They’ve been behind some good players throughout their career here, but they took advantage of the opportunity and got a championship.”

It’s the ninth time the AHS girls have either won outright or shared an NWOAL championship, and the first since 2004.

The Blue Streaks exploded for 23 points in the first quarter on their way to a 63-43 NWOAL victory over Delta, Thursday, Feb. 10.

AHS led 23-6 after the first quarter and 35-18 at halftime. The Streaks outscored the Panthers 28-25 in the second half for the 20- point margin of victory.

Wyse led all scorers with 14 points and 10 rebounds as nine Blue Streaks scored.

The Vikings, ranked 14th in Division III by the Associated Press, and Blue Streaks could meet again in a sectional final at Defiance.

If Archbold defeats Liberty Center (6-13) in a Tuesday, Feb. 22 sectional semifinal at Defiance High School, the Streaks play the top-seeded Vikings for a sectional championship.

Tinora (16-2), ranked 12th in D-III, is second-seeded at Defiance, and plays in the second bracket.