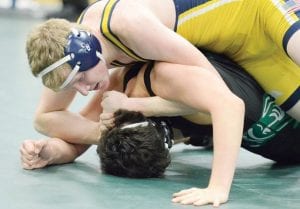 Caleb Ranzau stuffs a half-nelson on his Delta opponent. Ranzau then pinned the Panther.– photo by Mario Gomez

Archbold returned to the wrestling mats for its final Northwest Ohio Athletic League quad meet of the season, Thursday, Feb. 7, at Delta.

The Streaks lost to the Panthers 45-20 but bounced back and defeated Bryan 63-6 to finish 5-3 in the NWOAL.

The Panthers defeated Archbold for the second time in less than a week.

On Saturday, Feb. 2, the Panthers bounced the Streaks 51-24 from the state dual meet tournament.

Archbold gave up six points at 106 pounds, where it was void, and another six after losing by a fall at 113 lbs.

Archbold lost the next two weight classes by a decision and a pin to fall behind 21- 8.

Josh Nofziger (145 lbs.) stopped the run with a 3-1 decision, but AHS dropped the next two matches by decision and pin to fall behind 30-11. 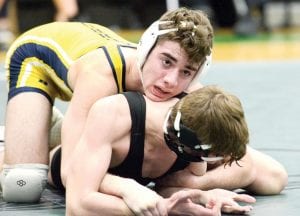 Josh Nofziger looks to his coaches for instructions against his Delta opponent.– photo by Mario Gomez

Caleb Ranzau (170 lbs.) and Mason Babcock (182 lbs.) won the final matches of the night for the Blue and Gold with a pin and decision, respectively.

Delta won the final three matches of the night via forfeit, decision and pin for the 45-20 final.

“I thought (Delta’s) kids– when they were outmatched– wrestled pretty well against us,” said Brian Becher, AHS head coach.

“We just didn’t wrestle very hard. We’ve got to get a little bit hard-nosed.”

The Golden Bears filled only seven of the 14 weight classes, so when Rusty Short (113 lbs.) pinned his opponent, the match had already been determined.

“They’re just really young,” said Becher. “It’s a testament to those kids to get out there and wrestle hard.”

Babcock was the only wrestler to go the distance, winning a 13-6 decision.

Wauseon was the NWOAL dual meet winner, going 8-0, followed by Delta at 7-1.

“We’re obviously not in for a team title,” said Becher. “Our focus is, it’s the last time to fine-tune things before the sectional tournament.”

The tournament was held on Saturday, Feb. 9, after being postponed from the original Jan. 16 date due to inclement weather.