Streaks Up To Challenge, Knock Off Liberty Center 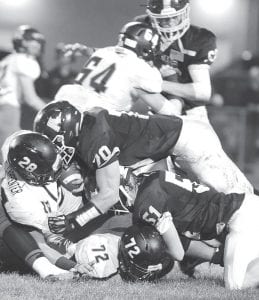 A packed crowd witnessed one of the best games in the area, Friday, Oct. 6, when Liberty Center, the preseason Northwest Ohio Athletic League favorite, faced league-leading Archbold in the Blue Streaks’ Homecoming game.

The winner would more than likely hold its own destiny come playoff time, and the loser would have to fight the rest of the season to secure a playoff spot.

Archbold’s defense could not stop LC’s two-headed monster running game of Caleb Carpenter and North West, but made the important stops when it counted and helped lead a total team effort to win 21-12.

The Streaks retained their lead in the NWOAL with a 4- 0 record, and are 6-1 overall.

“They (LC) are a heck of a football team,” said David Dominique, AHS head coach.

“We knew it was going to be a four-quarter battle, and we got that tonight.

Archbold, ranked ninth in Division III and third in the latest Region 18 poll, took the opening kickoff and did what it’s done every game but one this year: score first.

The Streaks used an 11- play drive that began at their own 33-yard line and scored on a Sam Petersen 24-yard run for a 7-0 lead with 6:30 left in the first quarter.

The teams exchanged punts until late in the second quarter, when LC used good field position at the Archbold 43 to score in four plays on a Carpenter 28-yard run.

The point-after kick was blocked by Ben Zimmerman, and the Streaks led 7-6 with 5:19 left in the first half.

The Streaks then went on another 11-play drive that ate up most of the remaining 2:53 of the first half.

Gabe Petersen used his arm and his legs to drive Archbold 75 yards and score from 1 yard out for a 14-6 halftime lead.

“It was big for us to get that ball in the end zone,” said Dominique. “They kind of had the momentum towards the middle of that second quarter. so that was a huge momentum swing for us.”

LC looked like a team possessed to start the second half and used its potent ground game to grind out a 14-play drive that covered 83 yards and chewed up over six minutes, ending in a West 4- yard touchdown run.

The Tigers tried a twopoint conversion but were turned back by the Streak defense, and trailed 14-12.

Archbold started its first possession of the second half with a seven-play drive that ended with a interception at the LC 6.

The Tigers went back to the ground, taking the ball down to their own 40 on eight straight running plays where they were faced with a fourth-and-one.

LC handed it to Carpenter. The Tiger was met by S. Petersen at the line for no gain and a turnover on downs.

Archbold took advantage of the short field, using seven run plays and one pass play to move to the LC 13. G. Petersen called his own number and scampered into the end zone for his second score of the night and a 21-12 lead with 6:24 left.

Needing two scores, LC started a drive at its own 33 and ran the ball successfully down to the Archbold 6, where the Tigers faced another fourth-and-one.

The Tigers opted to try a 23-yard field goal, but Orry Killam’s kick was wide to the right. The Streaks took over at their own 20 with 3:43 remaining.

Archbold was in clock-killing mode at that point and faced a fourth-and-one at its own 41.

After trying to draw the defense offside, the Streaks called a time-out. The offense went back onto the field, and G. Petersen ran the ball up the middle for 3 yards and a critical first down that kept the clock running.

After Archbold punted with 18 seconds left, a Jarret Krugh desperation pass was intercepted, and the celebration was on for the Blue and Gold.

“We’ve said it all year long. Our defense may bend at times, but they don’t break. They don’t give up on plays, and you saw it again tonight,” said Dominique.

“It hasn’t always been pretty, but we’re finally getting to where we wanted to be as a program.

“It’s all about the guys and my assistant coaches. They make me look good at times.”

Archbold outgained LC with 261 yards of total offense compared to 245 for the Tigers, with 193 yards on the ground for the Streaks.

The Tigers gained 228 yards on the ground, the first time the Streaks allowed more than 100 yards to a team this season.

G. Petersen rushed for 141 yards on 28 carries with two touchdowns. He threw for 68 yards on 9-17 passing with two interceptions.

S. Petersen ran 10 times for 52 yards and one touchdown.

Carpenter rushed for 144 yards on 24 carries with one touchdown to lead LC.

West added 92 yards on 18 carries with one touchdown.