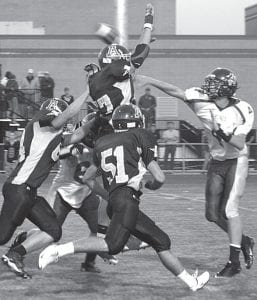 The Blue Streak defense rushes Evergreen quarterback Chad Pennington early in their NWOAL battle, Friday, Sept. 17. “All four weeks our defense has been outstanding,” said Bryan Miller, AHS head coach. Archbold is 4-0 after a 48-7 win over the Vikings.– photo by Scott Schultz

Squaring off against Evergreen (3-1, 2-1 NWOAL) on Friday, Sept. 17, in a league matchup, the Streak defense again had a stellar night. AHS limited the Vikings to just 7 points and gave up only 113 yards of total offense in a 48-7 Blue Streak rout.

“I’m telling you, everyone wants to talk about our offense, but it’s our defense,” said Bryan Miller, AHS head coach. “All four weeks our defense has been outstanding.

“It starts with our defensive coordinator, Andy Bentley. He is an intense guy, and he gets the guys ready to play.

“The coaching has been great and the 11 guys out on the field are getting it done; it is a complete team effort. The kids have been playing tough and physical. I am just real proud of our kids.”

“Archbold did anything they wanted to do tonight, said Todd Thieken, EHS head coach. “Archbold came ready to play tonight and we didn’t.”

Offensively, the Vikings didn’t have an answer for the Streak defense, mustering just 37 total yards in the first half. Their lone score came on a Chad Monaghan 4-yard run at the 5:22 mark of the second quarter.

Through the first four games, the AHS defense has given up an average of 12 points per game. While the defense is shutting down its opponents, the Archbold offense continues to put up the points, averaging 42 ppg.

Desmond Sleigh led the corps of receivers with six receptions for 133 yards and two touchdowns.

Morton threw for three touchdowns, with Tyson Dietrich hauling in a 27-yard TD catch and Sleigh’s touchdown receptions of 31 and 27 yards. Morton completed 20 of 29 for 232 yards on the night.

The Streaks put their first score on the board 13 plays later when Morton connected with Dietrich. Dietrich also added a rushing touchdown of 16 yards in the fourth quarter.

Sleigh scored his two touchdowns in the first half.

With the Streaks supporting a 27-7 halftime lead, it took the Blue and Gold just 11 seconds to extend the advantage to 27 points on the second-half kickoff. T.J. Gerken took the kick at the 20-yard line and crossed the goal line 80 yards later, upping the score to 34-7.

Gerken added a 12-yard touchdown run with 2:32 left in the third quarter as the Streaks coasted to the victory.

“All four games this year we have had either a defensive score or a special teams score, and that’s huge,” said Miller.

Gerken’s kickoff return marks the ninth time in Archbold history a kickoff has been returned for a TD.

The 80-yard run places him sixth for the longest return. Tim Grieser holds the record, with a 93-yard return against Swanton in 1970.