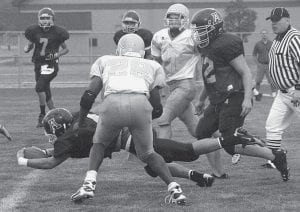 David Rupp dives across the goal line for the Blue Streaks’ first touchdown against Ayersville. Rupp scored four TDs on runs of 7, 10, and 3 yards, and a 79-yard interception return for a TD. The INT put Rupp in the fifth spot for longest interception returns for a touchdown. The Streaks won 38- 20.- photo by Scott Schultz

The 2008 high school football season is officially underway, and the Archbold Blue Streaks opened with an offensive showing against the Ayersville Pilots, Friday, Aug. 22.

Playing under the lights on their home turf, the Blue and Gold, under John Downey, head coach, jumped out to a 7-0 lead in the opening minutes and never trailed on their way to a 38-20 non-league victory.

“Both coaches should be proud of the effort. We went after it for 48 minutes.”

For an opening game, fans couldn’t have asked for a better match-up in two of the area’s top running backs- Archbold’s Jake Fidler and Ayersville’s Anthony King.

King may have run away with the yardage, totaling 282 yards on 24 carries and scoring three touchdowns, but Fidler’s Streaks registered the victory.

Fidler also had a very productive opening game, rushing for 144 yards on 23 carries. The Archbold senior also closed in on the all-time receiving record with two receptions for 16 yards.

Fidler may have chewed up the yardage for AHS, but teammate and senior signal caller David Rupp was right behind with 99 yards on 17 carries. He crossed the goal line four times, including a 79-yard touchdown return for a score.

Rupp’s first touchdown came at the 9:48 mark of the first quarter, capping off a nine-play drive by diving across the goal line.

Archbold’s defense stepped up to the plate in the first 12 minutes, shutting out the Pilots.

The Streaks scored in the opening seconds of the second quarter as Rupp crossed the goal line from 10 yards out for a 14-0 lead.

When you have a player the caliber of King, no lead is safe, and King gave the fans a taste of what he can do.

The 211-pound running back appeared to be stopped on the Ayersville sideline, but ended up outracing everyone for a 68- yard touchdown with 11:27 left in the second quarter.

It was his first of three long runs. King scored again on runs of 68 and 65 yards for the Pilots’ total of 20.

“We gave up some plays, made adjustments, and then gave up another big play,” said Downey. “When we are not aggressive on defense and don’t execute, things can get ugly.

“We will not face many backs as good as Anthony King. He played both ways and gave a heck of an effort.

“Offensively I thought we played pretty well. We did have some inconsistency and a few bad plays that stalled us, but all in all I thought our offensive execution was pretty good and the line came off the ball.

“We made a lot of first-game mistakes, but gave great effort.”

On the offensive side, Rupp was leading his team with three offensive touchdowns and one interception. Rupp picked off quarterback Matt Steece in the second quarter and took the interception 79 yards for the score.

Sam Grime holds the record, retuning an INT 94 yards in 1966 against Delta.

Aaron Bontrager, a sophomore, put the Streaks up 24-14 just before the half with a 39- yard field goal.

Breon Price crossed the goal on a 14-yard run and Rupp scored on a 3-yard run in the third quarter for Archbold’s total of 38 points.

“Bottom line is, we made too many mistakes,” said Chris Dales, Ayersville head coach. “The difference in the game is Archbold just outmanned us.

“Archbold is a bigger school; their numbers are bigger. That is the life of a small school playing a bigger school, and that was the difference in the game.”