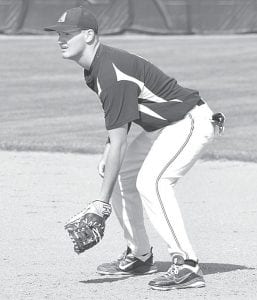 Zach Driver gets ready to field the ball at first base. The Streaks advanced to the Div. III district tournament at Defiance, where they’ll play Lake, tomorrow, Thursday, at 4:15 p.m.– photo by Mario Gomez

Archbold took advantage of a pair of wild pitches in its Division III sectional baseball final against Liberty Center, Wednesday, May 9, to win 4-3.

The win broke a six-game losing streak for AHS.

With the score knotted at 2 in the sectional final after four innings, pinch runner Evan Wyse scored on a wild pitch by Tiger hurler Arland Babcock to take a 3-2 lead.

Archbold added its fourth run in the bottom of the fifth on a wild pitch, but the Tigers made things exciting, closing the gap to 4-3 after scoring in the top of the sixth. Sean Westhoven hit a double and scored on a single by Josh Smith.

Smith was left stranded on base as AHS edged the Tigers 4-3.

Tyson Dietrich recorded the win. In seven innings he gave up three runs on five hits, struck out six, and walked one.

Chandler Tuckerman went 1-3 at the plate with a double and two runs batted in.

In regular-season action, AHS suffered a pair of losses but picked up one win against Hilltop.

The Streaks were looking to break Bryan’s 38-game Northwest Ohio Athletic League win streak, Monday, May 7, but came up short. The Blue and Gold took the defending league champs into extra innings before losing 7-6 at Bryan.

Bryan raised its record to 14-3, and won the NWOAL with an 8-0 record, its fifth straight title. AHS finished 4-4 in the league.

The Streaks came out firing in the top of the first inning, scoring three runs off a Tyson Dietrich two-run triple and a Chandler Tuckerman perfectly executed squeeze bunt.

The Bears narrowed the gap to 3-2 in the bottom of the inning. Both teams scored two runs in the third for a 5-4 AHS lead going into the fourth.

Bryan scored twice in the fourth for a 6-5 lead.

Archbold’s Tanner Wyse led off the seventh with a single. Dietrich took a while at bat, but after 10 pitches reached first base on a walk.

Tuckerman bunted both runners over and a Zach Driver deep fly to left field drove in T. Wyse to knot the score at 6, sending the game into extra innings.

In the bottom of the eighth, Bryan’s Tanner Vollmer set off a wild celebration in his dugout with a single to right field, driving in the winning run.

Taylor Price suffered the loss on the mound. In four innings he gave up one run on two hits, struck out four, and walked two.

T. Wyse, Michael Walker and Zach Zimmerman all went 2-4 at the plate. Dietrich tripled and had two RBIs. Tuckerman was 1-2 with an RBI.

Defiance tallied eight runs in the first and scored in every inning but the fifth. Archbold’s lone run came in the fifth.

Tyson Schnitkey (1-5) suffered the loss. In three innings he gave up 12 runs on nine hits, struck out one and walked three.

Archbold scored eight runs in the bottom of the first in- ning in a 16-6 non-league win over Hilltop, Friday, May 11, at Memorial Park.

Price recorded the win, giving up six runs on six hits, striking out six, and walking five in four innings.