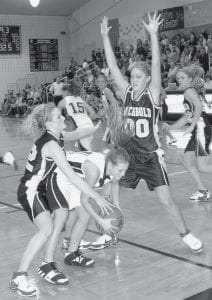 The Streaks started the week at the Defiance Clinic Classic, Monday, Dec. 17 and Tuesday, Dec. 18. They beat Defiance 48-38 in the semifinal, but lost to Tinora in the championship game, 59-50.

Archbold is 7-4 on the season.

Pettisville called a time-out after Dani Newman passed the ball to Adi Lange, who scored for an 8-2 lead. With more than two minutes left in the first quarter, Abbey Graber raised the score to 14-6, causing another PHS time-out.

A Newman drive to the basket gave AHS an 18-10 lead at the end of one.

Pettisville pulled within three, 18-15, as the Birds sank a three-pointer and a deuce. As time expired, the Streaks were ahead 24-22.

AHS didn’t come out of the locker room as strong as it did in the first quarter, and Pettisville took advantage. PHS tied the score at 26, causing Kevin Miller, AHS coach, to take a time-out.

The Blackbirds then scored a trey and another bucket to give them a five-point lead, 31-26.

With less than a minute and a half left, Lange sank two free throws to close within one.

The Streaks built a good lead toward the end of the fourth, and with less than a minute left, the Birds started to foul to stop the clock.

Graber made one of two foul shots. Pettisville drove the ball and put up a quick three for a 49-44 score.

Graber was fouled again and sank both ends of a one-andone. Pettisville again scored a quick three, followed by a timeout.

Bri Wyse was fouled and was successful at both her foul shots. PHS followed with a bucket.

The Birds called their third time-out in 30 seconds. With 6.2 seconds left, they were within four points.

Pettisville fouled Graber with 5.0 seconds left. The Blue Streak made both of her free throws to seal the game, 55-49.

“It was an excellent high school basketball game,” said Miller. “Both teams played hard and had a lot of runs.

“We moved the ball much more effectively tonight and took the ball to the basket strong in the second half.”

Lange led all scorers with 19 points. Newman had 16 and Graber scored 12.

Eight of Archbold’s 16 fourthquarter points were made at the free-throw line, giving them the 10-point win.

“It was nice to see us shoot the ball better than we have been,” said Miller. “The kids did a nice job of taking care of the ball and showed a lot of poise at the foul line as well.”

Graber led all scorers with 13 points; she also had eight of the Blue Streaks’ 37 rebounds. Lange scored 10 points.

“Tinora did a great job of moving the basketball,” said Miller. “They penetrated well, had a good inside/outside game, and did an excellent job of finding the open person.”

Graber led the Streaks with 12 points.