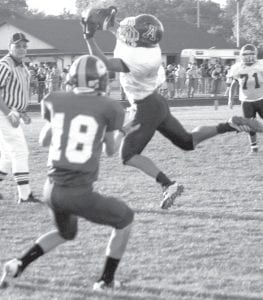 A scoreless first half, two touchdowns within minutes of each other, and an 83- yard kickoff return allowed the Archbold Blue Streaks to slip out of Bryan with a 14- 7 Northwest Ohio Athletic League football victory, Friday, Sept. 3.

Looking to avenge a 35-10 loss from last year, Archbold had its hands full until Noah Keefer returned an 83- yard kickoff return for what proved to be the game-winning touchdown.

“Noah is our most intense player,” said Bryan Miller, AHS head coach. “He just took the game over, offensively and defensively. He did a great job for us.”

“We made some mistakes. We had some opportunities but didn’t take advantage of them,” said Travis Cooper, BHS head coach. “Nobody gave us a chance tonight, and we showed we were every bit as good as Archbold, but Archbold was just better than us tonight.”

After a scoreless first half, Archbold struck first, on its opening possession of the second half.

The Bears received the kickoff to open the half, but their offense stalled after six plays, forcing a punt.

The Streaks put together a nine-play drive with Keefer scoring from 14 yards out for a 7-0 AHS lead.

The Bears bounced right back. Tommy Eyre capped off a six-play drive with a 24- yard touchdown run. It was their only score.

“I could not be happier with the way the defense played tonight,” said Miller. “They did an awesome job; they won the game for us. This was the defense’s win.”

With the score knotted at 7, Keefer took the ensuing kickoff, darted between defenders, and found a lane in front of the Archbold bench, racing 83 yards for a touchdown.

The AHS defense did the rest.

Keefer’s kickoff return for a touchdown is only the eighth time in Archbold history that a kickoff has been returned for a TD.

“On the kickoff we kicked to the guy we didn’t want to kick it to,” said Cooper. “Our kids stayed in their lanes, no one made a play, and it ended up being the difference in the game.”

Bryan looked like it would capitalize on a Garrett Morton interception and score in the first quarter. Bandon Poncsak returned the ball 31 yards to the Streaks’ 31-yard line, and the Bears picked up 13 yards on four plays before their luck changed from good to bad.

Bryan was hit with a 5- yard penalty; then, facing third-and-eight, Cody Robinson, the Bears’ signal caller, was dropped for an 18-yard loss. An incomplete pass followed, and Bryan turned the ball over on downs.

It wasn’t just the Bears that had missed opportunities.

Starting on its own 24- yard line on its third possession of the game, Archbold put together an 11-play drive that spanned the end of the first quarter and start of the second.

With the Streaks facing a third-and-goal on the 3-yard line, Morton coughed up the ball and Bryan recovered it in the end zone for a touchback.

Archbold came up short on its next possession when 6- foot-8 Golden Bear Alex Hey got his paw on a 35-yard field goal attempt by Bontrager in the closing minutes of the first half.

“We just weren’t sharp on offense to start the game,” said Miller.

“We fumbled on the 3-yard line going in and had the field goal blocked.

“We had opportunities. We were just fortunate to punch one in and then have Noah score on the kickoff return.”