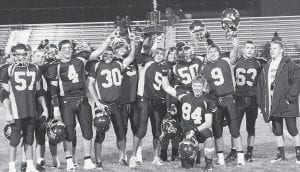 Whenever Archbold and Wauseon get together on the gridiron, one never knows what to expect.

The two have met 54 times. More than likely, in those 54 games things may have not gone the way one would expect.

Entertaining the Indians, Friday, Oct. 17, AHS was looking to bounce back from a 35-7 loss to Patrick Henry.

Wauseon, which may be one of the most improved teams in the Northwest Ohio Athletic League, was looking to hold on to the Lions Club Trophy and stay in the hunt for a league title.

There may have been a question of what to expect in this game of friendly rivals, but after giving up a first-quarter field goal, AHS settled down and handed the Indians a 49-10 loss.

Downey: “We Didn’t Get Off To A Good Start”

On their first series of plays, the Indians looked like they would be three-and-out. But on the ensuing punt by Clay Simpkins, the Streaks were hit with a roughing-the-kicker penalty, giving WHS a first down.

The Indians could not take advantage and were forced to punt three plays later.

On his first play from scrimmage, David Rupp, AHS quarterback, threw an interception. Wauseon took advantage of the turnover, and Simpkins hit a 35-yard field goal for the game’s first score.

“We didn’t get off to a good start,” said John Downey, AHS head coach.

“We had a roughing-thekicker call and turned the ball over, and that set the tone. If we didn’t have the turnover, they wouldn’t have made the field goal.”

The Streaks settled down, and Rupp threw his first of four touchdown passes. Drew Smith picked up 15 yards on a toss from Rupp; Rupp gained six on the ground, then connected with Christian Goering for eight.

Rupp then hit Jake Fidler for a 50-yard touchdown toss.

The Streak defense forced a three-and-out, and in what seemed like an instant replay, Rupp hit Fidler again for his second 50-yard touchdown toss and a 14-3 lead to end the first quarter.

Breon Price upped the Streaks’ lead to 21-3 on a 10- yard TD run in the second quarter.

Rupp’s third TD toss also came in the second quarter. He connected with Noah Keefer on a 30-yard strike for a 28-3 halftime lead.

The AHS quarterback upped the advantage to 35-3 on a 6- yard run with 8:38 left in the third quarter.

The Rupp-Fidler duo also combined for a 68-yard toss in the quarter for a 42-3 lead.

Garrett Morton took over at quarterback and scored on a 2-yard run with 5:18 left in the fourth.

for a 95-yard kickoff return.

TIRE game for 371 yards, placing him third on Archbold’s top 10 list for passing yards in a single game.

Rupp wasn’t the only one to get in the record book. Fidler finished the game with 239 yards receiving, breaking Jimmy Dunning’s record of 191 yards against Bryan in 2007.

While the AHS offense was racking up the points, the Blue Streak defense allowed just 128 total yards: 101 on the ground and 27 in the air.

AHS finished with 573 total yards, using its aerial assault to rack up 415 yards and running for 158.

“I thought our defense played extremely well,” said Downey. “John Culler had a nice defensive game plan, and we executed it pretty solidly.

“We gave up a few yards, but the bottom line is Wauseon couldn’t sustain anything.

“Offensively, we thought Wauseon would have a hard time with our five wide. That was the game plan. We attacked their defense extremely well.

“I thought Bryan Miller called a really good game. If you don’t prepare for a five wide, it’s hard to make adjustments over the course of a game to stop it.”

The Streaks play their final game of the regular season, Friday, Oct. 24. AHS travels to Liberty Center (8-1, 6-1 NWOAL) for their league finale.

In the Oct. 14 Ohio High School Athletic Association computer rankings, Archbold was sixth in Division V Region 18 with 11.85 points. The Tigers were seventh with 11.7.

The top eight teams advance to the playoffs.