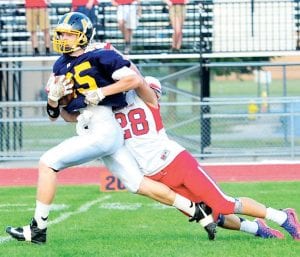 What started as a close game turned into a rout when Patrick Henry invaded Archbold, Friday, Sept. 22, for another key Northwest Ohio Athletic League game.

The score was deadlocked at 7 when Archbold ran off the next 28 points to build a comfortable lead and coast to a 42-13 win.

“As a team we played well tonight… physical,” said David Dominique, AHS head coach. “If you want to beat a team like Patrick Henry you have to be physical.

“Our offensive and defensive lines came to play.”

Archbold, ranked fourth in Division V Region 18, kicked off to start the game. The Patriots gained a couple first downs but were forced to punt.

The Streaks, who have scored on every first possession in each game this year, took over at their own 14- yard line.

It looked like the streak would be broken, but a 56- yard pass from Gabe Petersen to Deven Girdham on third and 20 kept the drive alive at the PH 18.

Two plays later, G. Petersen scored from 17 yards out to get AHS on the board with 4:01 left in the first quarter.

The Patriots answered with a 10-play drive that covered 81 yards, ending with a Xavier Wensink 2- yard touchdown run to tie the game at 7 at the start of the second quarter.

Archbold took a 14-7 lead with 8:10 left in the first half on a seven-play drive in which G. Petersen scored on a 12-yard touchdown run.

PH went three-and-out and gave the Streaks the ball back with 6:26 left in the second.

It took only 13 seconds for AHS to extend its lead to 21-7 as Petersen hit Nic Rodriguez for a 57-yard touchdown pass.

After another PH punt, Archbold took over at its own 29. The Streaks upped the lead to 28-7 at halftime on a seven-play drive that ended with G. Petersen hitting Girdham for a 31-yard touchdown pass on fourth down.

After a scoreless third quarter, the Streaks scored on a 19-yard Sam Petersen run for Archbold’s biggest lead of the night, 35-7, with 11:16 left.

PH answered with a 35- yard touchdown pass from Jarrett Maas to Sam Zimmer, closing the gap to 35-13 after the point-after-touchdown kick was no good.

With 7:53 remaining, Archbold went on its last scoring drive of the night at its own 45, scoring in five plays on a G. Petersen 44- yard run.

Kaiden Bedsole connected on his sixth PAT kick of the night to give Archbold the 42-13 win.

Archbold had 472 yards of total offense, including 227 yards rushing and 245 yards through the air.

G. Petersen again led the charge for AHS, rushing for 108 yards on 15 carries with three touchdowns and throwing for 245 yards on 13-17 passing with two touchdowns.

S. Petersen rushed for 61 yards on 12 carries with one touchdown.

“We saw something that we liked,” said Dominique. “They were eliminating our run game early on, so we found some openings in the passing game, and we were able to execute that.”

Will Morrow rushed for 61 yards on 13 carries.

The Archbold defense gave up 249 yards of offense but held the Pats to 99 yards rushing, the fifth straight opponent who failed to reach the century mark in rushing against the Streaks.

“We knew we had to stop the run. You’ve got to force them to be one dimensional,” said Dominique.

“They’re a very good team and a balanced team, so take away one and force them to pass and it got us in good situations.”