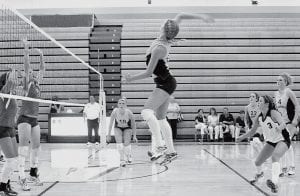 Dani Newman is ready for a kill in Archbold’s contest with Patrick Henry, Tuesday, Sept. 11. The Streaks finished third at the Golden Spike Invitational, Saturday, Sept. 22, and host the Streak Spike-Tacular this Saturday, Sept. 29.- photo by Scott Schultz

Defiance served first, but served out, which set the tone for much of the game.

Dani Newman spiked the ball hard on the next play for a kill.

A long rally took place at 4-1. The point went into the Streaks’ favor after Stacy Wyse hit an overhead kill.

After Wyse and Dani Newman double-blocked a Defiance attack at 16-13, the Streaks went on a seven-point run. Adi Lange smacked the ball down to take the score to game point, 24-13. Wyse served an ace to win 25-15.

While Defiance scored the first point of the second game, the next three points went to AHS due to Defiance’s mistakes.

A Defiance player got in the net at 12-5, and the Streaks scored another five points before Defiance stopped the run.

Kern played smart, hitting a roll shot right in a DHS hole for a 23-15 advantage. The second game was won 25-16 because of Bulldog errors.

Dani Newman started the third game with an uncontested kill at 2-1. The Blue and Gold hit the ball out at 3-2, but then went on a 12-0 run.

A Devin Newman kill took the score to match point, 24-6.

DHS scored the next two points, but Dani Newman put the game away with a kill to win 25-8.

In their first match the Streaks missed only two serves out of 50. Wyse led AHS with three aces.

Kern and Dani Newman led Archbold in digs, with 12 and 10, respectively. Dani Newman had seven kills; Lange had five.

The Streaks almost caught Edison in the second game, but fell short.

Serve reception was a problem because of Edison’s excellent servers. The Streaks only passed 75 percent of the serves (31/41).

Dani Newman led all spikers with nine kills, followed by Lange and Kern with five each.

Individual stats for the tournament: