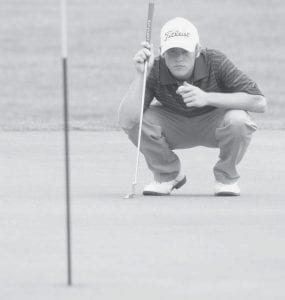 Steven Kinsman checks the contour of the green in action earlier this season. He was named First Team All-League at the NWOAL tournament last week.- photo by David Pugh

Bryan won the meet with a team score of 291. The Streaks finished with 317; Wauseon, last year’s champion, was third, with 319.

The Streaks bested the Bulldogs by two strokes on an overcast day in the low 70-degree range.

Bostelman was low man for AHS. He shot a 46, nine strokes over par.

Kinsman was match medalist in a tri-match at Delta, Thursday, Sept. 18. He shot an even par 36.

The top three teams and four individual low scorers, not on a qualifying team, advance to the district tournament at Bowling Green, Thursday, Oct. 2.