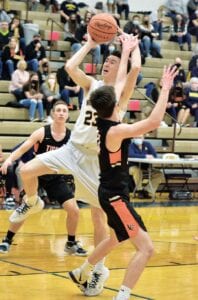 Archbold junior Tyler Hurst (23) goes hard to the basket and is fouled by a Liberty Center player during their Division III sectional final, Saturday, Feb. 27, in the Thunderdome. The Streaks survived a last-second shot attempt to win 36-34.– photo by Mario Gomez

Archbold was pushed to the limit by Liberty Center for most of their Division III sectional boys basketball final, Saturday, Feb. 27, in the Thunderdome.

But a three-point attempt at the buzzer by Cam Krugh bounced off the front of the rim, allowing the Streaks to advance to the district semifinal with a 36-34 win.

“First game is always one of the most difficult games you’re gonna have in tournament,” said Joe Frank, AHS head coach.

“I give (LC) all the credit in the world. They did everything but win the game.

“It’s survive and advance, and we were able to do that. We’re pretty fortunate.”

Archbold (19-4) faces Ottawa Hills (10-3) in the nightcap of the district semifinals at Toledo Central Catholic tomorrow, Thursday, at 7:30 pm.

Liberty Center (12-11) also pushed the Streaks to the limit in their Northwest Ohio Athletic League contest in a 52-48 loss on Jan. 22.

The Tigers played as if it were the fifth quarter of that first contest, coming out and setting the tone defensively and making things difficult for Archbold.

The Tigers got the final basket of the quarter but Archbold was up 19-17 at the half.

“They had a lot to do with the way we played, and we got a little tentative,” said Frank. “It’s a difficult defense that you don’t see a lot of, and I didn’t think we attacked it.

“When we did attack it, we ended up getting layups.”

Down To The Wire

The teams exchanged baskets to start the third.

Trey Patterson scored on a layup for a 30-24 advantage after three.

A pair of DJ Newman scores pulled the Streaks within two, 30-28.

Newman scored on an offensive rebound and kept Archbold within striking distance, 34-33, at the 2:51 mark.

As time was expiring, Trey Theobald drove the baseline and threw up a shot that bounced off the rim.

Newman went high for the offensive rebound and hit the put-back for a 35-34 lead.

On LC’s next possession, a pass intended for Conrad was stolen by Ashton Kammeyer.

The Tigers fouled Newman to send him to the line for a one-and-one with 12 seconds on the clock.

Newman hit the first free throw but missed the second for a 36-34 lead.

LC took the ball with 9.3 seconds left and put the ball in Krugh’s hands.

The senior found an opening from three-point-land for the win, but the ball hit off the rim as the buzzer sounded.

“I told our guys I was proud of them for hanging in there,” said Frank. “Things were not looking good there for a while, but we kept our composure and kept plugging away, and DJ got that big tip.”

Newman led all scorers with 14 points, while Alex Roth chipped in 11.