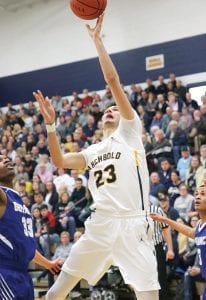 Archbold’s Rigo Ramos (23) shoots over Defiance’s Nasir Mitchell (33) in the first quarter of their non-league battle. The Blue Streak senior finished with 14 points as Archbold survived a comeback attempt by the Bulldogs to remain undefeated at 21-0.– photo by Mary Huber

Ahead by as many as 12 points, the Archbold boys basketball team survived a comeback attempt by Defiance that took the difference down to only two points with 33 seconds left and came away with a 51-46 non-league victory, Saturday, Feb. 16, in the Thunderdome.

“They did everything we thought they would,” said Joe Frank, AHS head coach.

“They competed; they made some plays; they had some kids step up in crunch time, and they put a lot of pressure on us.

“At the end of the day, our kids were able to rise to the challenge and make enough plays to win the game.”

Archbold never trailed, as Rigo Ramos opened the scoring with only 15 seconds off the clock.

A tight first quarter resulted in a 13-10 Blue Streak lead.

The third quarter was relatively even as AHS was on top 33-23.

Defiance went on a 7-3 run that closed the gap to three, 36-33, to open the fourth. Will Lammers opened with a three-pointer, followed by a bucket from Nasir Mitchell.

Ramos hit his second three of the night to take the difference back to eight, 36- 28, but Jack Vanderhorst hit a deuce and then a three to swing the momentum to the Bulldogs.

After Frank called a timeout, Jeron Williams took the momentum back, hitting back-to-back treys to take the difference back to nine, 42-33.

Naton scored for DHS, and Williams went coast-to-coast for a bucket.

After a deuce by Vanderhorst and a three from Lammers, Williams had a driving layup for two for a 46-40 lead.

Vanderhorst hit his third trey of the night to get the difference back to three, 46- 43, with 1:28 left.

Lammers hit his third trey of the night to get Defiance within two, 48-46, with 33 seconds on the clock.

After a Defiance time-out, Ramos was fouled and hit the front end of a one-and-one.

The Bulldogs ran down the court and Lammers’ three-point attempt was missed. Austin Wiemken secured the rebound and was fouled with 6.3 seconds on the clock. He hit both free throws to secure the victory for Archbold.

The Bulldogs “made shots” in the second half to make the difference, said Frank.

“Those are good players. They aren’t going to miss that many shots again in another half like that. It just doesn’t make sense that happened.

“We were a little disappointed. We felt we had some opportunities the first half to widen the gap a little bit and didn’t take advantage of those.

“Teams are going to make runs at us. Good teams always do. But if we’re the team that we think we are, we’ve got to respond, and we had the answer for it in the form of Jeron Williams” in the third period.

Rigo “made some big plays. He rebounded the ball well. He had a huge three in the fourth quarter, as well,” said Frank.

“At the end of the day, that game was going to be valuable for us because that’s the kind of game you’ll find in a tournament.

“I would say we probably won’t see too many guys shooting the ball 15 feet behind the line like Vanderhorst was. Holy cow!”

Vanderhorst led all scorers, with 17.

Both teams hit six treys. Defiance had one more twopoint bucket, but Archbold hit 11 foul shots to four for the Bulldogs.