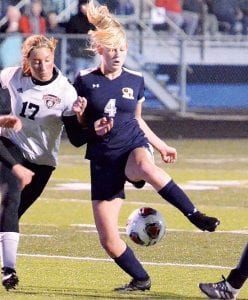 Archbold (16-1-3) scored a goal in each half and faced little challenge from Spencerville (16-4) en route to a 2-0 Division III regional girls soccer semifinal win at Defiance, Tuesday, Oct. 29.

“We definitely didn’t play our best game, but it was enough to get through,” said Jen Kidder, AHS assistant coach.

“Our defense was outstanding today. There was hardly a ball that got by them.”

The Streaks struck early when Macy Peterson booted a long shot into the right corner that cleared the gloves of Spencerville goalkeeper Kottia Williams with only 4:07 off the clock.

Archbold had chances in the first 25 minutes to take the lead with a pair of shots that hit the post but cleared the goal.

Spencerville came alive in the final 15 minutes of the first half, attacking with more consistency, but got turned back by the AHS defense and shut down by keeper Reagan Kohler to keep the game 1-0 as the half ended.

“We came out super strong, which we have a tendency to not do,” said Kidder.

“I think we let our guard down a little bit and they saw they had some momentum. That’s when we had a little bit of a breakdown.”

The Streaks shut down any Spencerville comeback bid early in the second half.

Kalyn Baker took a deep shot that was deflected by a Bearcat defender, changing the path of the shot and leaving the keeper off balance. The shot found the back of the net and the Streaks held an insurmountable 2-0 lead as the offense held possession for a majority of the second half, allowing limited chances for the Bearcats.

“We knew back in June the potential was there to make a really long tournament run,” said Kidder.

“We told them getting to the regional championship game was doable for them.”