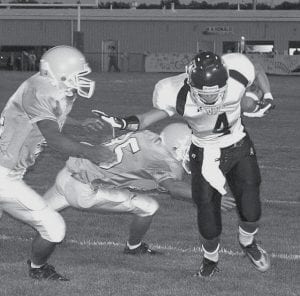 David Rupp (4) hauls in a pass and fends off two would-be Montpelier tacklers for a first down. Rupp caught a 12-yard pass from Gene Goering for a touchdown and also threw a 67-yard TD pass to Jacob Fidler when he took over quarterbacking duties in the Streaks’ NWOAL victory.- photo by Scott Schultz

It may have been Montpelier’s Homecoming celebration, Friday, Sept. 28, but it was anything but joyous for the Locomotives when the Streaks rolled out of town.

The Streaks showed why they are undefeated in the Northwest Ohio Athletic League by drubbing the Locos, 54-7, under Joe Brigle, head coach. The Streaks support a 5-1 record and are 4-0 in the NWOAL. Montpelier falls to 2-4, 1-4 NWOAL.

“I was real pleased the way we came out, very methodical and took care of business,” said John Downey, AHS head coach. “They did run a good play on the touchdown pass, but all-in-all I was really pleased.

“Now we can get ready for the championship run.”

“Give a lot of credit to coach Downey and the Streaks,” said Brigle. “That is probably the best offense that we have faced thus far.

“Archbold just spreads you out and makes it very difficult to defend. We knew it would be a struggle with the offense that Archbold runs. We have not played well defensively lately, and that is discouraging. We just have to regroup and be ready to play.”

Once again it was the highpowered Streak offense that provided the quick knock-out punch.

With a 41-7 halftime lead the Streaks were able to get plenty of reserves valuable playing time.

Week after week the Streak offense has proven it can score at any time, but the defense has not been a pushover either.

AHS opened a 28-0 lead on a pair of touchdown tosses from Gene Goering to Jimmy Dunning, a 12-yard pass to David Rupp, and TD runs from 1 yard and 2 yards out by Goering.

But it is the Archbold defense that has all but quietly played a vital roll in the team’s success, shutting out Montpelier for three quarters.

The Locos’ lone score came in the second quarter when quarterback Max Lamberson connected with Britt Moore on an 84-yard toss.

Goering answered with his third touchdown toss to Dunning from 34 yards.

Rupp tossed up the pigskin also, going two of five for 75 yards, including a 67-yard TD toss to Jacob Fidler.

Fidler led the core of receivers with three catches for 99 yards. Dunning closed out the game with four receptions for 67 yards and two touchdowns.

Archbold travels to Delta for their fifth NWOAL contest of the season, Friday, Oct. 5.