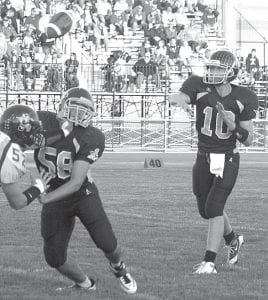 The Archbold Blue Streak football team kept its perfect record intact with a 56-12 drubbing of Swanton, Friday, Sept. 24, at Swanton.

The Archbold offense again provided the firepower, proving that with a houseful of targets, opposing teams have a very difficult time defending the Blue and Gold.

Senior signal caller Garrett Morton passed the wealth around, connecting with six different receivers. He completed 16 of 20 passes for 370 yards and six touchdowns.

Archbold’s first score came at the 8:06 mark of the first quarter as Morton connected with TJ Gerken on a 52-yard TD reception.

It was Gerken’s first of three touchdown catches of the night. He led the core of receivers with six receptions for 123 yards.

“We played good,” said Bryan Miller, AHS head coach. “We still made mistakes on offense. Just little things– and that is what I am disappointed in.”

The Bulldogs answered Archbold’s first TD on their next possession with an 11-play drive. Tom Leahey crossed the goal line from 1 yard out. The failed point-after touchdown attempt left the host Bulldogs trailing 7- 6.

For the second straight week the Streaks’ special teams answered the call. Kevin Kohlman kicked off for the Dogs, and Gerken put another six points on the board after racing 90 yards for a score.

Gerken’s run puts him in second place for longest kickoff return for a touchdown, just behind Tim Grieser’s 1970 run of 93 yards against Swanton.

The AHS defense had a bend-but-don’t-break performance, giving up 251 yards on the ground but only 12 points. Andrew Foore scored on a 3-yard run in the second quarter for Swanton’s total of 12 points.

Leahey led the ground game for Swanton with 138 yards on 28 attempts.

“Swanton has a real good running team,” said Miller. “We have seen Swanton on film, and they just run over everyone they play.

“I knew they would give us problems running. They dominated us up front. We were very soft, very passive on defense. This is our worst performance defensively, but give Swanton credit. They were bigger and stronger and they came off the ball and hit.

“We have stopped other good running teams, so there is no reason why we shouldn’t stop this team, and we didn’t do it.”