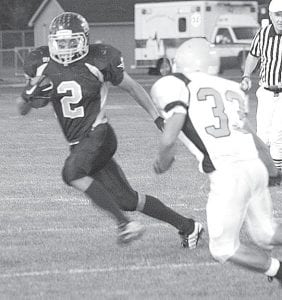 Noah Keefer (2) runs for yardage against Montpelier, Friday, Oct. 1. Keefer ran for one touchdown and caught passes for two more in the Blue Streaks’ 76-8 NWOAL victory.–photo by Scott Schultz

“Offensively, we played pretty good last week, but we were not happy with the defense,” said Bryan Miller, AHS head coach.

“So our goal this week was to come out, eliminate mistakes, and play better football, and I think we did that.”

The Locomotives had trouble getting out of the station. On the second play from scrimmage, Adam Gilcher fumbled on his own 5-yard line. Noah Keefer recovered for the Blue and Gold.

One play later, senior signal caller Garrett Morton connected with Keefer for his first of six touchdown tosses of the night.

Since the start of the season, AHS has come up with scores in every game from either the defense or special teams. Against the Locos it was no different.

Montpelier’s Logan McKelvey dropped back to punt when the snap went sailing over his head. Archbold’s Hayden Stamm scooped up the ball and went in from 5 yards out.

It was Stamm’s second defensive score of the season; he also returned an interception 59 yards in the season opener against Hicksville.

With the offense hitting on all cylinders, the 76-point total broke the old record of 63 points scored in 2009, also against Montpelier.

The game well in hand, Miller gave his backup players experience throughout the second half.

Montpelier’s lone score came in the closing minutes of the third quarter when Collin Mercer broke off a 61- yard touchdown run.

“The kids got a lot of reps tonight,” said Miller. “All the freshmen should have gotten in. That’s great for them, to get in on a Friday night. Everybody got reps in different positions, and that’s a good thing.”

With 2:43 left in the fourth, freshman Jacob Reyes found an opening and outraced the Locos for a 94-yard touchdown run.

The run put Reyes in a tie for second place for the longest touchdown run from scrimmage. Bill Palmer had a 94-yard run in 1956 against Montpelier.

The longest touchdown run was a 98-yard run set by Jerry Zuver in 1972 against… Montpelier.

Aaron Bontrager’s 10 PATs in a single game ties him for fourth place in the state of Ohio for most extra point kicks in a game, according to the Ohio High School Athletic Association website.