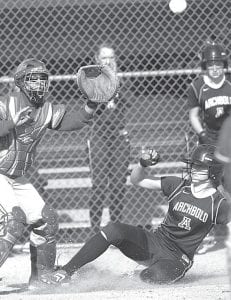 Becca Gerig beats the throw to home plate and scores a run in the second inning of Archbold’s 11-1 victory over Edon, Tuesday, March 27.– photo by Mary Huber

The Archbold softball team is off to a 4-1 start.

The Streaks started the season with a tough loss to the Knights, Monday, March 26.

Archbold mustered only one run on five hits while the Knights scored three runs on seven hits.

Hanna Allison was the losing pitcher, despite striking out nine while walking only two.

Megan Gerig drove in the only AHS run with a runbatted in single.

Chelsea Goebel, who had earlier singled, scored after Cassidy Wyse singled and Gerig had back-to-back hits. Gerig had two hits to pace the Streak attack.

The Streaks bounced back with a five-inning win over Edon, Tuesday, March 27.

Wyse led the way, going 3-4 with a triple and two RBIs. Becca Gerig, Allison, Goebel, and Cassidy Williams each had two hits.

Allison was the winning pitcher, giving up one run on six hits while striking out four and walking three.

Archbold jumped out to a 4-0 lead after three innings and defeated the Bulldogs 4- 1, Thursday, March 29.

The Streaks managed only four hits but Wyse and B. Gerig each tripled while Morgan Cody homered to make them count.

Allison again pitched well, giving up only one run on four hits, striking out six and walking three.

The Streaks picked up a hard-fought victory over the Wildcats in the opening game of a doubleheader, Saturday, March 31.

B. Gerig led off with a home run. The Wildcats tied the score at 1 in the fourth inning.

The Streaks scored two runs in the sixth with the help of an error and an RBI single by Allison.

Allison again picked up the win on the mound, giving up only one run on eight hits while striking out two and walking three.

Archbold won a slugfest in the nightcap that lasted nine innings.

The Streaks faced a 5-2 deficit headed into the sixth but scored twice to narrow the deficit to 5-4.

A big two-out double by B. Gerig was the key blow in the inning.

AHS took the lead in the seventh with four straight singles. Cody and M. Gerig each drove in runs.

The Wildcats were down to their last out in the seventh, but a double with two runners on base tied the score with the winning run gunned down at the plate on a relay from Wyse to catcher Ruthie Beck.

Both teams scored a run in the eighth, which led to the finish. Napoleon committed two errors after a Cody single, which led to two runs. B. Gerig added two insurance runs with a two-run blast for the 11-7 final.

Allison, in relief of Winter Fricke, picked up the win on the mound.

Wyse was 4-4 with three doubles and two RBIs. B. Gerig was 4-6 with two doubles and a home run while driving in four.

“This was quite a first week,” said Joe Frank, AHS head coach.

“We stubbed our toe at Otsego, but bounced back with four straight wins, and that is a tribute to the girls’ ability to compete.

“Three of our four wins were close ballgames that required us to make plays in pressure situations.

“I am very pleased with Hanna Allison’s pitching and our overall defense. Our hitting has been inconsistent at times, but we are improving.

“Overall, it was a successful first week of softball for us.”