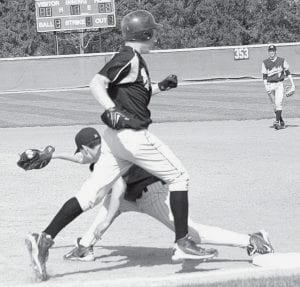 Pettisville’s Josh Bruner is thrown out at first base on a pass from Archbold’s Kyle Walker to David Rupp in their April 18 contest.- photo by Scott Schultz

Archbold hosted Holgate, Friday, April 25, and beat the Tigers 10-3. The Blue and Gold split a doubleheader at Hicksville, Saturday, April 26, losing the first game 6-5 but winning the second 6-0.

The Streaks mustered only one run in the 4-1 loss.

Corey Walker went 2/3 at the plate, hitting a double and one run batted in.

LC scored in the bottom half of the first and second innings and adding two more in the fifth. AHS scored its lone run in the top half of the fourth.

Archbold pounded out eight hits in its eighth win of the season. Corey Walker picked up the win, giving up two runs on one hit, striking out six and walking four in 2 1/3 innings. Also on the mound were Paxson Miller and Kinsman. Miller went 3 2/3 innings, giving up five runs on five hits, striking out two and walking three. Kinsman threw one inning and struck out two.

Collin Walker led AHS at the plate, going 2/2 with a double. Marc Miller went 1/3 with an RBI double.

Bryan scored seven runs in the third and fourth innings and four in the sixth. Archbold’s sole run came in the top of the sixth.

Rupp was the losing pitcher. He threw 3 1/3 innings and allowed five runs on three hits, struck out four and walked five. Pitching in relief were Corey Walker, Miller, Collin Walker, and Jeremy Neuenschwander.

Bryan had nine hits while Archbold had only four.

David Dominique led AHS at the plate with a double.

Miller was the winning pitcher. He allowed three runs on eight hits, struck out four, and walked one in seven innings.

Holgate had eight hits, led by Keeterle with a first-inning home run.

In the first game Holgate had a 5-0 lead after four innings. Archbold tied the score at 5 with four runs in the sixth and one in the seventh, sending the game into extra innings.

Hicksville aced the contest with a run in the bottom of the seventh.

Kinsman was the losing pitcher. In 1 2/3 innings he allowed one run on three hits, struck out five and walked none. Miller, Neuenschwander, and Collin Walker pitched in relief.

Archbold had 10 hits and was led by Corey Walker, who went 3/3 at the plate including an RBI. Kyle Walker was 3/4 include a double and 2 RBIs. Dominique was 3/5.

Corey Walker kept the Aces’ bats silent in the second game, as he allowed only four hits, struck out eight, and walked five in seven innings.

The Streaks scored four runs in the second and single runs in the fourth and seventh innings for the 6-0 win.

Neuenschwander was 2/2 at the plate. Rupp was 1/3 including a triple.