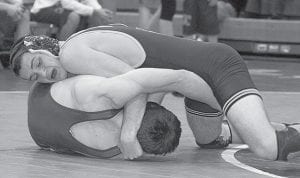 It was a deceiving score from a much-improved team.

The Vikings were in a hole early with forfeits at 189, 215, and 285 pounds, but the quality of wrestling they brought doesn’t do their score justice.

The Vikes bounced right back with a Sam Heilman victory over Trevor Meyer at 135 lbs.

TJ Weirauch picked up a 4-0 win over Brandon Beltinger at 112 lbs. for AHS.

Wrestling started at 135 lbs in the nightcap. The Streaks were down early, but not out.

LC’s Chris Rentschler picked up an 8-2 win over Meyer for three team points.

“I thought Eli (Urbina) wrestled his kid tough,” said Brian Becher, AHS head coach. “The biggest thing in his match was he made the same mistake four times.

“He snapped the kid in a front headlock real tough. Eli just wasn’t getting his legs back, and (Knapp) kept getting in on his legs. But the thing is he kept battling.

“For a first-year wrestler, Eli battled hard. I can’t be expecting him to win, but Eli put himself in a position to win. I know he is disappointed.”

Trailing 18-0 and heading into the 171-lb. weight class, the Streaks got a jump-start from Fidler, who is in his first year of wrestling.

Facing Jake Baldwin, the Tiger scored first on a takedown, but Fidler rallied for an escape to close the first period.

Holding a 2-1 lead, Baldwin started in the down position to start the second and scored an escape. Fidler picked up a penalty point; Baldwin came back with a takedown for two points.

Fidler scored on a reversal; Baldwin scored an escape for a 6-4 lead.

Baldwin was held scoreless in the third. Fidler recorded the win by adding four penalty points and an escape for the 9-6 win.

The Tiger bench was hit with an unsportsmanlike penalty during the match, resulting in a two-point team deduction, but the Streaks still trailed 16-3.

“There is world of difference in Jake Fidler, the way he is wrestling now compared to the start of the season,” said Becher. “He is wrestling with confidence. He thinks he can compete with people, as opposing as trying not to lose. He is going out there and trying to win matches.”

With LC leading 25-3, the heavyweights took the mat. Archbold’s Brandon Dennie jumped out to a 5-0 lead before giving up a reversal and losing to Jordan Raines at 1:41.

“I thought Kyle wrestled a good match,” said Becher. “I know he is disappointed with a 3-0 loss. That kid was sectional champ last year, and Kyle is a first-year wrestler as well. I thought he wrestled tough.”

Archbold picked up six points when Allison (103 lbs.) took a forfeit. Weirauch (112 lbs.) added six more points with a pin over Ben Martinez, closing the gap to 31-15 with three weight classes to go.

Oliver Stuckey (119 lbs.) and Tiger Zac Poignon squared off. Poignon led 2-0 after the first two minutes. The lead held up for the second period, and the two started neutral to start the final two minutes.

Stuckey scored first on a takedown, and Poignon tallied an escape and a takedown.

Stuckey came right back with a reversal; Poignon scored an escape. With a 6-4 lead and time running out, Stuckey scored a takedown with two seconds left to send the match into overtime.

The first overtime is sudden death, with both wrestlers starting in the neutral position. It didn’t take Stuckey long to win. Scoring on a takedown and putting Poignon to his back, Stuckey won 8-6, closing the gap to 31-18.

With two matches left LC had the meet wrapped up. Broc Peterson (125 lbs.) added six more points, pinning Danny Young. Cowell (130 lbs.) capped off the night with a pin of Logan Mack as the first period ended for the 37-24 final.

“In Trevor’s (Meyer) match we knew what the guy was going to do, and we worked on it in practice. (Rentschler) sat Trevor on his butt. Trevor just didn’t get his hand posted out and got rolled through.

“That was a nine-point swing. We should have scored four, and (Rentschler) scored five on that one move. That move was a turning point; you wrestle different when you’re up by four rather than down by five.”

“Obviously, a big turning point that would have won it for us was Brandon Dennie’s match. Liberty had the two team points deducted, and if Brandon would have gotten a pin we would have won by one.

“He put the kid on his back and was in good position. He tried to step over the body and took the pressure off, and (Raines) rolled through and got Brandon in a far side cradle. That is tough to get out of.

“I thought Oliver (Stuckey) sort of packed it in when he gave up that takedown and was down 5-2, but he battled back and got the takedown, and went after the kid in overtime and nearly got a fall.

“There were definitely some bright spots. As a coach you look at the things to improve on.

“We have nothing to hang our heads about tonight.

“I am sure people weren’t even giving us a chance, and we were in it.”