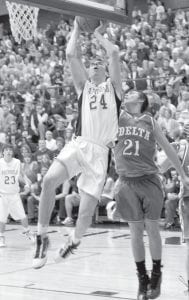 The Archbold boys basketball team returns to the Division III regional at Bowling Green State University after defeating Delta 54-36 in the district final, Saturday, March 13 at the Grand Canyon in Napoleon.

“This was a hard-fought contest. It wasn’t easy, and we are just tickled to have the opportunity to go back to Bowling Green.”

“Give Archbold a lot of credit,” said Sprow, Delta head coach. “They are a great team and they are going to represent our area well at the regional.”

Someone once said that a good defense could beat a good offense.

How far can that take a team?

For now it has taken Archbold to the regional tournament.

Delta advanced to the district title game with a 53-48 win over Tinora, while the Blue and Gold defeated Evergreen 40-35 in their district semifinal.

A physical up-and-down first quarter set the stage for a tight contest, with Delta holding an 11-10 lead after the first eight minutes.

Behind the inside play of Luke Kammeyer and Garrett Morton, Archbold led 22- 17 at the midway point.

Christian Goering started the scoring in the second period, draining a three-pointer in front of the Delta bench.

Morton added a baseline jumper for two and a 15-11 lead.

Jordan Turner drove the lane for two. Archbold answered with Morton spotting Corey Walker at the top of the three-point line for a trey.

A deuce by Turner closed the difference to 18-15.

Morton made a basket, and after Corey Walker hauled in a rebound and missed, Kammeyer was right there with the put-back.

Turner hit a fadeaway jumper to end the first half with the Streaks leading 22- 17.

Archbold outscored the Panthers 13-10 in the third quarter for a 35-27 lead, but it was the fourth quarter when the Streak defense stepped it up just a little more, limiting Delta to just two field goals and five free throws.

Fricke opened the fourth scoring two at the foul line. Kammeyer came up with a steal on Delta’s next possession and was leading the fast break when the sophomore was fouled.

Josh Beverly was called for a technical foul on the play.

Fricke made one of two free throws, giving Archbold a 38-27 advantage. Morton added two more with a drive along the baseline. Kammeyer connected on a conventional three and AHS led 43-27.

“We wanted to probe inside and see what we could get, and Luke was able to finish it off for us,” said Krauss. “Our defense is something we have hung our hat on all year.

“We come after teams on defense.”

The Panthers finally broke into the scoring column with a free throw by Jackson.

Turner added four at the foul line and a jumper at the 4:05 mark, but Archbold had a comfortable 48-34 lead.

Fricke put the finishing touches on the win, hitting one at the foul line.

“Josh (Beverly) didn’t play against us during the season, and Delta is so good off the offensive glass,” said Krauss. “That was two main concerns for us at the defensive end, but overall I thought we did a pretty good job.”

“Give Archbold a ton of credit,” said Sprow. “They are known for their defense. We tried to get in an attack mode to get out of it; sometimes we were effective and sometimes we turned the ball over or just couldn’t hit a shot.”

Archbold sizzled from the field, hitting 53% and connecting on 18-26 at the foul line.

Turner paced the Panthers with 19 points. Kammeyer led Archbold with 16. Morton added 14 and Telly Fricke chipped in eight, all from the foul line.