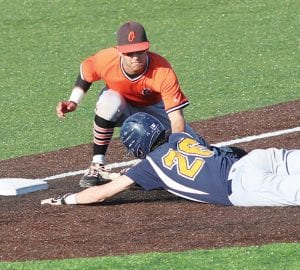 Jeron Williams is ruled safe at third base as he beats the tag of Otsego third baseman David Silva, Jr. Williams scored Archbold’s first run when Holden Galvan hit a sacrifice fly to center field in the next at-bat. The Streaks squeaked by the Knights 6-5 to advance to the district final.– photo by Mary Huber

Archbold (24-3) came out red hot in its Division III district semifinal with Otsego, Thursday, May 23, but ended up barely hanging on to win 6-5 and advance to the district finals for the fourth consecutive year.

A lead-off triple by Jeron Williams set the tone, while a double by Cory Erbskorn and singles by Kade Kern, Travis Ziegler, and Mitch Grosjean helped the Blue Streaks jump out to a 4-0 lead after one inning.

A two-out, two-run double by Kreighton Sims in the third gave Archbold a seemingly comfortable lead at 6-0 before things started to unravel late in the game.

Trying to save ace pitcher Rigo Ramos for the district championship against undefeated Lake, Dick Selgo, head coach, elected to lift Ramos after two scoreless innings and went with junior Ethan Hagans for the next four innings.

Hagans was effective as he limited the Knights to two runs, only one of which was earned.

“We got exactly what we needed from Ethan,” said Selgo. “He has pitched very well for us all year, and he certainly did his job tonight.” 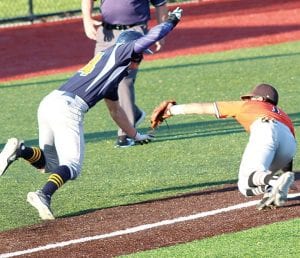 Kade Kern is caught between third base and home and is tagged out by Otsego third baseman David Silva Jr., completing a double play for the Knights in the fourth inning.– photo by Mary Huber

However, the Knights (17- 11) came charging back with two runs in the sixth and three more in the seventh, to cut the difference to one, 6-5.

With runners on first and second and two outs, Selgo went back to Ramos, using the re-entry rule. Ramos threw three pitches for the strike-out, and the Streaks breathed a huge sigh of relief as they finally finished off the Black Knights.

“The way we came out of the gate swinging the bats in that first inning really set the tone,” said the 11th-year head coach.

“However, it’s never over until you get that final out. Otsego didn’t quit, and we knew they wouldn’t. Our guys found a way to win and move on, and that’s all that matters at this point.”

The team’s leading hitter, Erbskorn, led the way at the plate with three hits, while Williams and Kern added two each.