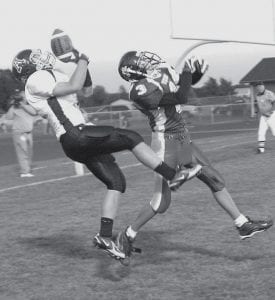 Jacob Fidler, left, attempts to catch a touchdown for the Blue Streaks. While he didn’t make the catch, he did catch a 15-yard pass from Gene Goering for a touchdown late in the first period, giving AHS a 28-0 first-quarter lead.- photo by Scott Schultz

The Vikings’ troubles started on the third play from scrimmage in their opening possession. The Streak defense forced a fumble and recovered the ball deep in Evergreen territory.

Evergreen punted on its next possession. On the second play from scrimmage, AHS struck again as Goering added a 46- yard touchdown run.

The Vikings’ woes continued throughout the first half as the Streaks converted two more EHS fumbles into scores.

Goering hit Ben Brader for a 21-yard touchdown toss at the 3:09 mark and connected with Jacob Fidler just minutes later for a 15-yard toss.

The Streaks closed the first quarter holding a 28-0 lead.

“I think Evergreen had five turnovers in their first five possessions, and I don’t think we had a hundred yards in those possessions,” said John Downey, AHS head coach.

“We got four scores from those turnovers, and that set the tone. All in all we wanted to come out and take care of business, and we did that.”

Goering was 6/14 for 153 yards and three touchdowns in the contest. Backups David Rupp and Corey Walker also got into the mix. Rupp put up Archbold’s sixth touchdown of the game on a 16-yard run in the second quarter. Walker got a taste of varsity play, going 4/8 for 57 yards.

Walker threw an interception that led to one of the Vikings’ scores in the closing seconds of the third quarter. Chad Moss- ing, who went 78 yards for the score, picked off Walker.

Evergreen’s other scores came on a pair of touchdown runs of 14 and 2 yards by quarterback Corey Trucker.

Capping Archbold scoring was Colton Martinez on a 5- yard run with 4:27 left.

“Archbold has a lot of talent, and when you give them that short field like we did in the first half with the turnovers, it’s kind of tough to play,” said Thieken. “Four turnovers in the first seven minutes of play didn’t help.

“We thought we could move the ball on them. We did have four starters out tonight and was down to our third tailback, and it obviously showed when he fumbled.”

“We did get our young kids in, and obviously they need some work,” said Downey. “We just got sloppy out there. Too many dropped balls, bad snaps, and penalties. We will have to clean that up.”