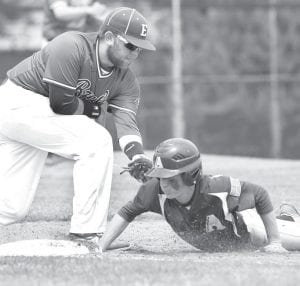 Toby Walker is safe on the throw to first base from Elmwood’s pitcher.– photo by Mary Huber

Senior Lathon Babcock fired a two-hit shutout to lead Archbold (22-8) to a 4- 0 win over Elmwood (18-8) in the Division III regional semifinals, Thursday, May 26, at Elida.

Babcock threw his fourth shutout of the year as he completely shut down the Royals offense.

“Lathon has had two excellent seasons for us, but right now he is almost unhittable,” said an excited Dick Selgo, AHS head coach.

“He has put this team on his shoulders and is carrying them as far down the tournament trail as he can.

“Babcock is also smart enough to know that he can’t do it alone, as he is not a high strike-out type of pitcher.”

With the bases loaded and only one out in the third inning, Elmwood’s Philip Buckingham hit a hard ground ball to second baseman Bryce Williams.

Williams flipped it to shortstop Derek Walker at second, and Walker fired a strike to first baseman Seth Mayer to complete the double play.

“They gave me all the confidence in the world,” said an elated Babcock.

“I knew I had a great defense behind me. Honestly, I wouldn’t be here without our defense.”

Williams, a sophomore, said, “Me and Walker were looking ‘double play’ the whole way in that situation. It’s hard to lose when our pitcher’s just dealing and throwing up zeros.”

Archbold scored the only run it really needed in the first inning.

D. Walker, the lead-off hitter, got the Streaks going right away with a base hit to left field. Toby Walker got on first base with a fielder’s choice that forced out D. Walker.

The Streaks added a run in the fourth inning as Williams drove in Bucklew with a run-batted-in single.

They scored again in the fifth as Nic Rodriguez got a hit, eventually scoring on an error by the Elmwood pitcher.

T. Walker drove in the fourth and final run for AHS in the top of the seventh to give Babcock his sixth win against only two losses.