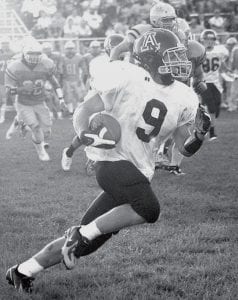 Archbold running back Jacob Fidler (9) looks to turn the corner and head into the open field in the Streaks’ 27-20 season opening victory at Ayersville.- photo by Scott Schultz

The Archbold Blue Streaks flew into the Landing Strip, home of the Ayersville Pilots, for their opening game on Friday, but had to make a return trip on Saturday.

The wait was well worth it for Blue Streak fans and they recorded a 27-20 victory.

With David Rupp starting at quarterback, the Blue and Gold put the first points on the board when Rupp hit Ian Redd for a 53-yard touchdown pass with 36 seconds left in the first quarter.

The Archbold defense concerned John Downey, head coach, before the season, but it shot down the Pilots in the first half as AHS took a 6-0 lead into the locker room.

Second Half Lights Up Scoreboard

Ayersville scored on a 69-yard run by Tomas Rodriquez to kick off the second half, taking a 7-6 lead with the extra point at the 5:23 mark of the third quarter. 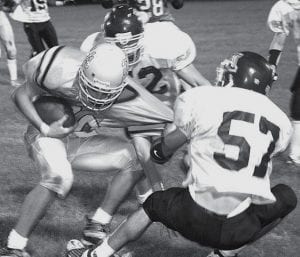 Chad Rufenacht (57) and a Blue Streak defensive teammate wrap up Ayersville signal caller Matt Steece in the backfield, dropping the Pilot for a loss of yards.- photo by Scott Schultz

Archbold defense gave up another huge run in the fourth when Pilot speedster Anthony King bolted free for a 65-yard run. King finished with 161 rushing yards and two touchdowns, scoring his second TD with 2:06 left.

The Archbold student section soon drowned out the Pilots’ enthusiasm when senior signal caller Gene Goering stepped onto the field.

The Pilot defense stepped up to the challenge, holding the Streaks scoreless in the third quarter. But the Archbold offense rolled in the fourth, scoring 21 points.

“When we brought Gene in it was time,” said Downey. “David (Rupp) wasn’t doing anything badly. We thought we just needed a spark, and David was having trouble gripping the ball.”

With Ayersville holding a 7-6 lead to start the final 12 minutes, Goering capped off a fiveplay drive with a 21-yard touchdown run.

Rupp put up impressive numbers, also, in the first half, connecting on 9/18 for 133 yards and one touchdown.

The two signal callers passed the wealth around, connecting with seven different receivers. Redd led the way with three catches for 96 yards and one TD.

“We Couldn’t Stop Him”

“It’s just kind of amazing. The kid (Goering) hasn’t practiced in forever; he has this blood problem, and he comes in and plays,” said Chris Dales, Ayersville head coach.

“We couldn’t stop him. He was the difference in the game, and our seniors couldn’t step up and stop him.

“Defensively we played well. My offense didn’t come to play; we do have some new guys in there that are kind of green, but we will get better as we go.”

“When Gene came in he just brings in a whole bunch of energy,” said Downey. “He was fresh; he just makes everything happen a little quicker; he has more experience. He means a lot to our offense, and he executed well.

“Our defense gave up two big plays on missed tackles. We had them stopped at the line of scrimmage and let them get off.

“Our defense got a little tired. I thought we kept Ayersville off balance all night except for those two long runs. We made them earn everything, we played with great effort, and we had some missed tackles.

“We have to finish those tackles in the open field.”