Streaks Shoot Down Comets in Opener 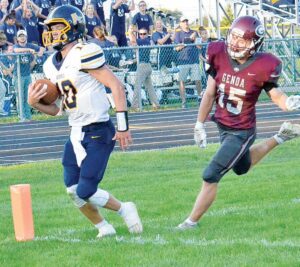 Quarterback DJ Newman (10) scored on a 64-yard touchdown and had one touchdown called back because of a penalty in Archbold’s season opener at Genoa, Friday, Aug. 20. The Streaks shut out the Comets 27-0.– photo by Mario Gomez

It wasn’t a full house at Genoa, Friday, Aug. 20, but fans were finally free to attend the first non-conference regular-season football game without attendance restrictions since 2019.

The Archbold faithful cheered and celebrated a 27-0 shutout in the first-ever meeting between the two teams.

The Streaks struggled offensively in the first half, but rode the success of a hard-hitting defense to earn the win and start the season 1-0.

“Last year was a crazy year, but nothing to complain about because we still got to play football,” said David Dominique, AHS head coach.

“It’s nice to see where you’re at, leading into league play. It was a good win for us, but we have a lot to clean up.”

Archbold took the opening kickoff and wasted little time getting on the board.

DJ Newman scored on the third play from scrimmage on a 64-yard touchdown run for a 6-0 lead with 10:28 left in the first quarter.

From that point the offense was marred with miscues and penalties that stopped drives and killed scoring opportunities.

A Newman 55-yard TD run was called back on one of the seven first-half penalties AHS was assessed.

“It’s first-game jitters, maybe,” said Dominique. “We’ve got a lot of young guys and new faces out there.”

The defense kept the lead safe in the first half, holding the Comets to an unsuccessful field goal try.

Archbold took possession at the 50-yard line with 1:39 left in the half and moved the ball to the Genoa 15- yard line.

Charlie Krieger outjumped his defender in the right corner of the end zone to snag a Newman pass that sent AHS into halftime leading 13-0.

“We went into halftime and I asked the guys, ‘Who’s stopping us?’ They answered, ‘We are,’” said Dominique.

“We knew it was going to be a little undisciplined at times, but these guys know we’ve got to get better.”

The Archbold defense continued to dominate, forcing a punt on Genoa’s first offensive series of the second half.

The Streaks put together a 12-play drive that started at the Archbold 1, but stalled at the Genoa 9 when a Newman pass fell incomplete on fourth down.

After another Comet punt, the Streaks got to business at their own 43 and scored on an eight-play drive that ended in a Newman-to- Krieger 10-yard touchdown pass to make it 20-0 with 11:56 remaining.

Genoa started at the Archbold 36 on a good kickoff return, but the AHS defense allowed just three yards on the series. A 50-yard field goal fell well short to keep the shutout intact.

“I was very pleased with the way our guys hit,” said Dominique. “A big thing for our defense is ‘bend but don’t break.’

“We talk about resiliency, and our guys were very resilient tonight.”

Archbold tacked on one more score on a 5-yard Carson Dominique TD run.

The Blue Streaks rolled up 421 yards of offense, including 275 yards rushing.

The defense was equally stingy, giving up just 111 yards.

Newman rushed for 159 yards on 18 carries with a touchdown, and completed 15- 27 passes for 146 yards with a pair of touchdown passes.

Dominique rushed for 86 yards on 16 carries with a touchdown.

Karter Behnfeldt and Gavin Bailey hauled in four catches each for 45 and 35 yards, respectively.

Quarterback Aiden Brunkhorst led the Comets with 26 yards on 9-20 passing and 49 yards rushing on 12 carries.