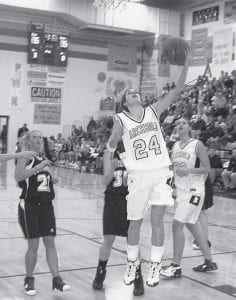 Andrea Allan drives the lane for a layup early in Archbold’s nonleague contest with Pettisville. Allan led all scorers with 19 points.- photo by Scott Schultz

The Birds, ranked fifth in Ohio’s Division IV by the Associated Press, came into the contest with a perfect 8-0 record.

“This was a huge win for our girls,” said Brian Ziegler, AHS head coach. “The girls did a nice job in the first quarter, establishing a 10-point lead.

“Pettisville is a nice team and is well-coached. We knew they would make runs, and they did.

“We held our composure enough to hang on.”

“Archbold came at us very intense, and we didn’t match it, especially in the first quarter,” said Jason Waldvogel, PHS head coach. “I’m proud of our girls battling the whole game.” 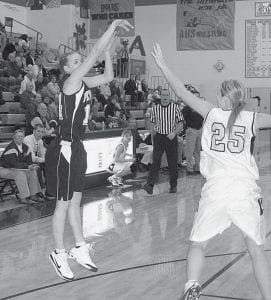 Stephanie Yoder, left, hits a shot in the second period for the Blackbirds. The sophomore scored seven points.- photo by Scott Schultz

Stacy Wyse scored the game’s first points with only eight seconds gone for a 2-0 AHS lead.

Rachel Beck was fouled on a layup with 6:25 left in the first quarter. Beck hit the free throw and PHS led 3-2.

The teams traded baskets after Andrea Allan hit a shot and Stephanie Yoder had a steal and layup with 4:47 left in the first for a 5-4 PHS advantage.

It was the last time Pettisville led the entire game.

Archbold had six players score in the first period, and were led by Allan with seven points.

Archbold extended the gap to 24-10 before Katie Weber broke the dry spell with two free throws for Pettisville.

The Birds closed the gap to 24-16 on a bucket by Kayla King, but Archbold came right back as Allan was fouled with 5:05 left in the first half. She sank both ends of a one-and-one to give AHS a 10-point lead.

A Dani Leaser shot at the buzzer bounced off the rim, and AHS took a 34-24 lead into the locker room.

Pettisville came out of the locker room and made a run at the Streaks, outscoring AHS 9- 4 in the first 2:24 of the third period to close the difference to five, 38-33.

After Ziegler called time-out, Allan drove the lane for two to take the lead back to seven, 40- 33.

Archbold built the difference to 10, 43-33, when Pettisville made another run. Alexa Short sank two free throws, Brady Avina made a shot, Weber sank another basket, and it was a four-point game, 43-39.

Archbold called another timeout with 1:29 left. When play resumed, Erica King hit a shot to bring PHS to within two, 43-41.

Jessica Ramirez responded for AHS with a big three-pointer, opening the difference back to five, 46-41. Allan made two free throws with 15.9 seconds left in the period for a 48-41 AHS lead entering the final eight minutes.

Pettisville closed to within six, 58-52, with a minutes left, but Archbold prevailed 63-55.

Allan led all scorers with 19 points. Abbey Graber also was in double figures for AHS, with 11.

Pettisville won the rebounding battle 34-30, led by Haley Nofziger with 11.

In the junior varsity contest, the Streaks handed the Birds their first loss of the season with a 37-34 victory.