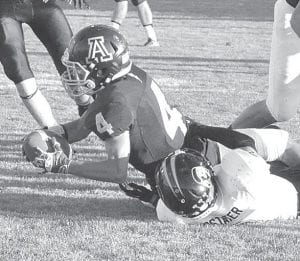 Jase Grosjean (4) stretches to cross the goal line against Fairview. The 20-yard touchdown run tied the score at 7 in the first quarter.– photo by Mario Gomez

The Fairview Apaches came to Archbold, Friday, Sept. 13, for a non-league football contest.

“This was a good team win. We had a few mistakes, but overall, it was a good win.”

Fairview took the opening kickoff and marched right down the field, taking an early lead on a 12-yard touchdown pass from Andy Robinson to Tucker O’Neil.

The Streaks answered with Jase Grosjean scampering for 20 yards. With the made point-after-touchdown attempt, the score was knotted at 7 just over five minutes into the game.

“You just never know with Fairview,” said Miller. “They have a potent offense.

“We gave them a short field on the touchdown. Fairview was driving; we weren’t exactly shutting them down.

“I thought the defense got better as the game went on.”

The Archbold defense shut the Apaches out the next two quarters.

The quarterback finished with 99 yards on 15 carries and tossed a total of 207 yards, completing 15-29 passes and one touchdown.

Lincoln Parsley, who was perfect on PATs, led the receiving corps, catching three passes for 66 yards.

Levi Wyse also ran for a 66-yard touchdown in the third quarter.

In Archbold football history, the longest touchdown run from scrimmage is held by Jerry Zuver, who busted off for 98 yards against Montpelier in 1972.