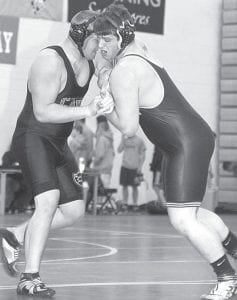 Brandon Dennie, right, was one of two Blue Streaks going 10-0 at the Ohio Division III Duals at St. Mary Central Catholic High School. He and Jordan Cowell were named First Team All- Tournament. He is shown in a match earlier this season.– photo by Scott Schultz