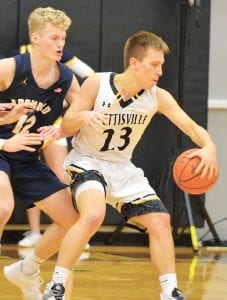 Pettisville’s Canidate Vickery (23) works his way to the basket against the defensive pressure of Archbold’s Noah Cheney (12).– photo by Mario Gomez

The Blue Streaks opened the game with an 11-0 run and never looked back, capturing a 53-27 non-league win.

“Sometimes it’s easy to draw stuff up on paper and then execute it, but a lot of that has to do with the other team.

“(Pettisville) is a good team that is gonna win a lot of games.”

Archbold led 14-5 after the first quarter on the strength of four three-point baskets– three from Jeron Williams.

The Streaks continued their hot shooting in the second, extending the lead after outscoring the Birds 20-8 with five more treys for a 34- 13 halftime lead.

“We had some looks at the basket and obviously they didn’t fall,” said Brian Leppelmeier, PHS head coach.

“I thought early on we weren’t executing our defensive game plan.” 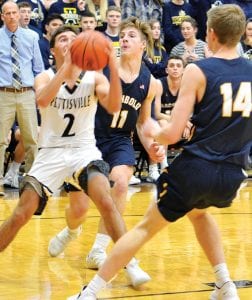 Archbold put an exclamation point on the game midway through the third when Rigo Ramos took the ball at the top of the key, drove left to the basket where there were no Blackbird defenders, and scored on a slam for a 42-17 advantage.

Up 48-17 to start the fourth, the AHS starters were on the bench for the majority of the quarter.

“Playing a game like this for us is beneficial,” said Leppelmeier. “We’re gonna find out what we do well and what we don’t do very well, because they are gonna expose us.

“You name the aspect of the game and we got outworked and out-hustled.”

Ramos was the only other Streak in double figures, scoring 10 points.