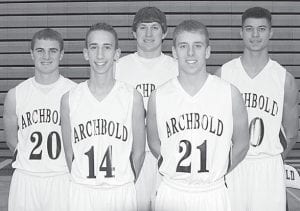 Doug Krauss has spent the last 28 seasons at the helm of the Archbold boys basketball team, gathering 14 Northwest Ohio Athletic League titles in the process, including the last three.

He returns five letterwinners from last year’s squad that finished 17-6 before bowing out as district runners up.

“We have five letterwinners who received valuable playing time last year,” said Krauss. “We expect these returners to be our leaders at both ends of the court.

“Tyson and Zeb are returning as two-year starters, and we’ll look to them to lead us at both ends of the court.

“Jay, Taylor, and Evan played off the bench, and all played roles well to help our team.

Mikala Avina sinks a threepointer for the Birds. She scored seven points in the loss to Wauseon.– photo by Phil King

“Zeb and Tyson both had very nice junior seasons for us. We’re looking forward to both of them continuing to be key performers again this year.

“Zeb’s shooting is a key, but we need him to be more aggressive with the ball and to continue to improve at the defensive end.

“Tyson really came on as a junior, as he is a force inside, but is also capable of making plays on the perimeter. He will be counted on to continue to be a main contributor at both ends of the court.

“Taylor, Jay, and Evan all received a taste of varsity action a year ago and all will bring some spark to our team at both ends of the court.”

“All played a key role in our success last year, and they have left voids to fill,” said Krauss.

With the loss of Kammeyer, rebounding is a key issue for Krauss this year.

Last year the Streaks struggled at the foul line, shooting just 58%. Krauss said foul shooting is a priority this year.

“That’s where close games are won and lost,” said Krauss.

The Streaks averaged 45.7 ppg, while defensively they gave up 41.0 ppg.

AHS forced an average of 14 turnovers per game, but the Blue and Gold struggled in converting the turnovers into points.

“Point guard is an area where we will have some inexperience at the varsity level,” said Krauss.

“We have a couple of candidates in Grosjean and Goering, both who played the point for our JVs. Both received a little varsity action last year as well, and are capable of running our squad.

“Both will get the opportunity to compete for the position.”

“Like always, we hope to develop into a balanced team offensively, and we hope to be a team that can have five guys on the floor capable of scoring.

“We’ll be as good as our defense… but we need to capitalize off our opponents’ mistakes better. We’ll need to work hard to keep our defensive intensity up and give ourselves a chance to compete.

“With this team, playing with energy, passion, and intensity each night will give us an opportunity to compete.

“I feel we have a good mixture of players who will demonstrate the ability to play tough and play together.”

“With our experience, we should be able to realize that team chemistry is important, and that being able to accept a role on the team is key. We have some key personnel back, but we’ll need some guys to step up and lead.

“We’ll also need to be disciplined enough to take care of the ball offensively, tough enough to guard on each possession, and smart enough to check out on every shot.

“Our players understand what it takes to be the best.”

A good friend is a connection to life-a tie to the past, a road to the future, the key to sanity in a totally insane world.–Lois Wyse

Always forgive your enemies; nothing annoys then so much.–Oscar Wilde

It is wise to remember that you are one of those who can be fooled some of the time.– Laurence J. Peter