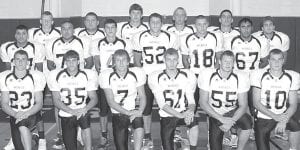 Miller, who is in his fourth year at the helm, lost 12 seniors to graduation.

Two starting quarterbacks, Evan Wyse and Tyson Dietrich, return. Dietrich, a senior, started last season but was sidelined early due to an injury.

“We return two starting quarterbacks and our starting center, which are obviously critical components of the offense,” said Miller. “We return three overall starters to the offensive line.

“Team speed will be a strength as well as talent at our skill positions. Our kicking and return games will be solid.

“Our players have put in a lot of hard work in the weight room this summer, and have prepared themselves well for the upcoming season.”

While the three are a key to the Streaks’ success this year, they lost some offensive players whose shoes may be a challenge to fill.

Lost to graduation was TJ Gerken, who had 50 catches for 669 yards, seven touchdowns, and two kickoff returns for touchdowns last year.

Gerken also returned a 79- yard punt for a score. He is second on the AHS all-time list for career touchdown catches, with 19.

Another key loss was Danny Young. Young led the team with 14 touchdowns last year, while Gerken closed last season with 12.

On the defensive side, Miller lost his leading tackler, Chandler Tuckerman. Tuckerman closed out last season with 93 tackles while teammate and graduate Tanner Wyse posted 52.

“Strong Summer In The Weight Room”

The kicking game should be a plus with returning kickoff specialist Lincoln Parsley. Parsley had 66 kickoffs last season for 2,815 yards.

He also returns as the team’s co-leading tackler, with 51, along with Dylan Lantz.

“Lack of depth on the offensive line is a weakness,” said Miller. “We are lacking in size and will usually be the smaller team on the field.

“We’ll be playing multiple players who lack varsity experience, including a host of sophomores. It will take some time for them to get their feet wet.

“We’ve had another strong summer in the weight room. Our kids have put in a lot of time and effort and are highly motivated. As always, we will need to stay healthy and must have our young guys step into their new varsity roles.

“We have a lot of potential.”

“They are no doubt the cream of the crop.”

The Streaks host Hicksville in a non-league contest, Friday, Aug. 24, for their season opener.